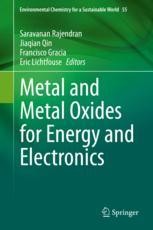 Metal and Metal Oxides for Energy and Electronics

Energy is a key world issue in the context of climate change and increasing population, 'calling for alternative fuels, better energy storage, and energy-saving devices. This books reviews the principles and applications of metals and metal oxides for energy, with focus on batteries, electrodes, nanomaterials, electronics, supercapacitors, biofuels and sensors.

Dr. Saravanan Rajendran has received his Ph.D in Physics-Material Science in 2013 from the Department of Nuclear Physics, University of Madras, Chennai, India. He was awarded the University Research Fellowship (URF) during the year 2009-2011 by the University of Madras. After working as an Assistant Professor in Dhanalakshmi College of Engineering, Chennai, India during the year of 2013-2014, he was awarded SERC and CONICYT-FONDECYT post-doctoral fellowship, University of Chile, Santiago in the year of 2014- 2017. He has worked (2017-2018) in the research group of Professor John Irvine, School of Chemistry, University of St Andrews, UK as a Postdoctoral Research Fellow within the framework of a EPSRC-Global Challenges Research Fund for the removal of Blue-Green Algae and their toxins. Currently, he is currently working as a Research Scientist, in the Faculty of Engineering, Department of Mechanical Engineering, University of Tarapacá, Arica, Chile. Also, Research Associate in SERC, Santiago, Chile. He is Associate Editor for International Journal of Environmental Science and Technology (Springer). His research interests focus in the area of nanostructured functional materials, photophysics, surface chemistry and nanocatalysts for renewable energy and waste water purification. He has published several International peer-reviewed Journals, eight book chapters and seven books published by renowned international publishers.

Dr Francisco Gracia received a PhD in Chemical Engineering from the University of Notre Dame, USA. He is currently Associate Professor at ChEBM Department, Universidad de Chile, and Deputy Director at the Multifunctional Materials Millennium Nucleus (MultiMat). His research interests are in the area of heterogeneous catalysis, nanostructured functional materials, gas - solid interphase reactivity with emphasis on CO2 activation and utilization, H2 generation, photocatalysis and energy-related applications. He is a co-author of 50+ research publications, a book chapter, and edited a book in subjects related to nanotechnology, photo- and environmental catalysis.

Dr. Jiaqian Qin is presently working as a Researcher in the Metallurgy and Materials Science Research Institute, Chulalongkorn University, Thailand. He obtained his Ph.D Degree in Physics from Sichuan University, China in 2010. After graduation, he was awarded JSPS post-doctoral fellowship, Ehime University, Japan in the year of 2010- 2012. His current research interest focus on the development of advanced nanostructured materials for energy storage and conversion applications like batteries, supercapacitors and nanocatalysts. He holds several China patents, over 90 publications in the international Journals of repute. He is the editor/editorial member of several reputed Journals like Scientific Report (Nature), Current Smart Materials, and Journal of Metals, Materials and Minerals (JMMM).

Dr. Eric Lichtfouse is a biogeochemist working at the University of Aix-Marseille, France. He has invented carbon-13 dating, a method allowing to measure the relative age and turnover of molecular organic compounds occurring in different temporal pools of any complex media. He is teaching scientific writing and communication, and has published the book Scientific Writing for Impact Factors, which includes a new tool – the Micro-Article - to identify the novelty of research results. He is founder and Chief Editor of scientific journals and series in environmental chemistry and agriculture. He got the Analytical Chemistry Prize by the French Chemical Society, the Grand Prize of the Universities of Nancy and Metz, and a Journal Citation Award by the Essential Indicators.
Show all