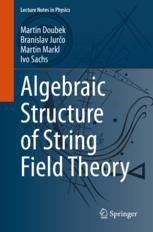 This book gives a modern presentation of modular operands and their role in string field theory. The authors aim to outline the arguments from the perspective of homotopy algebras and their operadic origin.

Part I reviews string field theory from the point of view of homotopy algebras, including A-infinity algebras, loop homotopy (quantum L-infinity) and IBL-infinity algebras governing its structure. Within this framework, the covariant construction of a string field theory naturally emerges as composition of two morphisms of particular odd modular operads. This part is intended primarily for researchers and graduate students who are interested in applications of higher algebraic structures to strings and quantum field theory.

Part II contains a comprehensive treatment of the mathematical background on operads and homotopy algebras in a broader context, which should appeal also to mathematicians who are not familiar with string theory.

Martin Doubek graduated from the Faculty of Mathematics and Physics of the Charles University in Prague.  He wrote his PhD thesis under supervision of Martin Markl at the Mathematical Institute of the Czech Academy of Sciences, and defended it in 2011. The promising career of this talented young mathematician was terminated in 2016 by his tragic death in a traffic accident.

Branislav Jurčo graduated from the Faculty of Nuclear Sciences and Physical Engineering of the Czech Technical University. He defended his PhD thesis, supervised by Jiří Tolar, in 1991. He was a Humboldt Fellow at TU in Clausthal and MPIM in Bonn. His postdoctoral experience also includes stays at CERN, CRM in Montreal and LMU in Munich.  He is currently an Associate Professor at the Faculty of Mathematics and Physics of the Charles University in Prague. His research focuses on applications of higher algebraic and geometric structures in theoretical and mathematical physics.

Martin Markl graduated from the Faculty of Mathematics and Physics of the Charles University in 1983 and defended his PhD thesis, written under supervision of Vojtěch Bartík, in 1987.  He was influenced at the early stage of his research career by Jim Stasheff during his repeated visits at the University of North Carolina at Chapel Hill. He is currently a senior research fellow of the Mathematical Institute of the Czech Academy of Sciences in Prague. His research is focused on homological algebra, geometry, and applications to mathematical physics.

Ivo Sachs graduated in 1991 from the faculty of physics of the ETH in Zurich and defended his PhD in 1994 under the supervision of Andreas Wipf. In 2001 he became a lecturer at the School of Mathematics at Trinity College, Dublin and, later on, was awarded a professorship in theoretical physics at the Ludwing-Maximilians-University in Munich in 2003. His main achievements are in quantum field theory, the structure of black holes and string field theory.