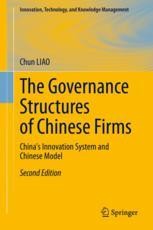 The Governance Structures of Chinese Firms

This book systematically defines and analyses the rise of China’s innovation system and Chinese corporate governance model. China’s achievement in artificial intelligence and high technology innovation has attracted the global attention. The country’s innovation system and Chinese model arose during the period between the mid-1990s and the first decade of 21 century, making it one of the leading countries in those fields.

This revised and expanded edition examines the Chinese innovation business model based on the basic concept of firm’s governance structure. It builds upon five dimensions: ownership and shareholding structure; interrelation between employer and employee; interrelation between firms; financing pattern and performance criteria; and innovation system and core competitiveness. This book also compares China’s innovation system with the American model and with the European model exemplified by Germany.

Chun Liao (廖春) is Professor of Economics at Shanghai Lixin University of Accounting and Finance in Shanghai, China. She holds a Ph.D from Free University of Berlin in Germany. She has published more than 40 articles on Chinese business, economics, and policy.