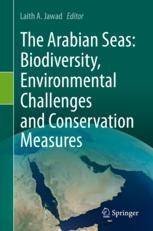 The Arabian Seas Marine Region encompasses marine areas from Djibouti to Pakistan, including the northern part of Somalia, the Red Sea, the Arabian/Persian Gulf, and parts of the Arabian Sea.

Human pressures on the coastal and marine environments are evident throughout the region, and have resulted in harmful environmental effects. Oil and domestic, urban and industrial pollutants in several areas of this part of the world have caused local habitat degradation, eutrophication and algal blooms. Further, coastal landfill, dredging, and sedimentation, as well as nutrient and sediment runoff from phosphate mining, agriculture and grazing, and reduction in freshwater seepage due to groundwater extraction are all contributing to the degradation of coastal environments.

This book discusses aspects not covered in other books on the region, which largely focus on marine biodiversity, and examines several environmental challenges that are often ignored, but which have a significant impact on the environment. Evaluating the status quo, it also recommends conservation measures and examines the abiotic factors that play a major main role in the environmental changes. Lastly, the book addresses the biodiversity of the area, providing a general context for the conservation and management measures discussed.
Show all
About the authors

Laith A. Jawad obtained MSc in Fish Taxonomy from the Zoology Department, University of Bristol, UK, in 1980. He then worked as a fish taxonomist at Basrah University, Iraq, for more than 20 years before moving to New Zealand in 1997. During this time, he founded the biochemical taxonomy of fishes of Iraq and published over 400 scientific papers and book reviews in leading scientific journals. He is the author and co-author of several biology textbooks published in Arabic. Recently, he contributed five chapters to the book Coastal Fishes: Habitat, Behaviour and Conservation, published by Nova Publishers, Canada. He also authored the book Dangerous Fishes of the Eastern and Southern Arabian Peninsula, published by Springer in 2017. He served as a fish biodiversity expert and consultant at the Ministry of Agriculture and Fisheries in Oman between 2008 and 2012, during which he co-authored two papers describing a new fish species in the Omani waters and reported over 80 fish species in Omani waters. He authored a guide to the fishes of the southern coasts of Oman published by the Ministry of Agriculture and Fisheries in Oman in 2018. He also published over 90 papers on the fish fauna of Oman, Iraq, Kuwait, and Saudi Arabia. In 2013, he started research collaborations with over 100 scientists from more than 50 countries around the globe investigating various aspects of fish taxonomy and ichthyology.