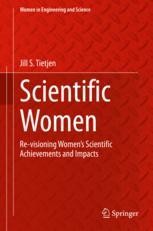 The book highlights women’s contributions to science, which have often been marginalized and overlooked throughout history. The book first provides an overview of the development of the various science professions over time - placed in socioeconomic and cultural contexts - and women’s role in the sciences throughout history. The author then exemplifies - through history, example, and case studies - that although women were denied a scientific education until fairly recently in our history, they have nevertheless demonstrated intellect and capability in mathematics, physical sciences, life sciences, social sciences, and computer sciences throughout time. Biographies of women who contributed to these fields since before the Common Era are interwoven into a discussion of the development of the scientific profession, the advancement of education, the professionalization of the various scientific occupations, and the advancement of women in society. This book is a follow up to the author's book “Engineering Women: Re-visioning Women's Scientific Achievements and Impacts” (Springer 2017). The author, Jill Tietjen, is the series editor for Springer’s Women in Engineering and Science book series.

Ms. Tietjen is the President and CEO of Technically Speaking, Inc. An electrical engineer, she has spent more than 40 years in the electric utility industry where she provided planning consulting services to electric utilities and organizations comprising the electric utility industry and served as an expert witness before public utility commissions and other government agencies. In 2015, she served as the CEO of the National Women’s Hall of Fame, based in Seneca Falls, New York (the birthplace of women’s rights). Today, she is a worldwide advocate for telling women’s stories and writing women into history.

An author and national speaker, Tietjen is the co-author of the award-winning and bestselling books Her Story: A Timeline of the Women Who Changed America and Hollywood: Her Story, An Illustrated History of Women and the Movies. Her introduction to engineering textbook, Keys to Engineering Success, was published by Prentice Hall in 2001. Previously (as Jill S. Baylor), she was a contributing author to the 1995 book She Does Math! Tietjen is the co-author of the Setting the Record Straight series of which three volumes have been published. Her book, Inspiring Women of the National Women’s Hall of Fame, was published in 2015. Her ebook for the Institute of Electrical and Electronics Engineers’ Women in Engineering series titled Recognizing and Taking Advantage of Opportunities was published in 2016. She is the series editor for Springer’s Women in Engineering and Science series and wrote the inaugural volume, Engineering Women: Re-visioning Women’s Scientific Achievements and Impacts. Tietjen has written chapters for other volumes in the series as well. She blogged for The Huffington Post from 2014-2018. Tietjen graduated from the University of Virginia (Tau Beta Pi, Virginia Alpha) with a B.S. in Applied Mathematics (minor in Electrical Engineering) and received her M.B.A. from the University of North Carolina – Charlotte. She is a registered professional engineer in Colorado.