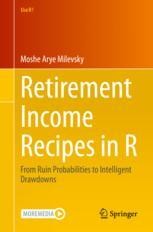 From Ruin Probabilities to Intelligent Drawdowns

This book provides computational tools that readers can use to flourish in the retirement income industry. Each chapter describes recipe-like algorithms and explains how to implement them via simple scripts in the freely available R coding language. Students can use those skills to generate quantitative answers to the most common questions in retirement income planning, as well as to develop a deeper understanding of the finance and economics underlying the field itself. The book will be an excellent asset for experienced students who are interested in advanced wealth management, and specifically within courses that focus on holistic modeling of the retirement income process. The material will also be useful to current and future wealth management professionals within the financial services industry. Readers should have a solid understanding of financial principles, as well as a rudimentary background in economics and accounting.

Moshe Arye Milevsky is a tenured professor of finance at the Schulich School of Business and a member of the Graduate Faculty in Mathematics and Statistics at York University in Toronto, Canada, where he teaches courses on wealth management, insurance and retirement planning. He has written over sixty-five peer-reviewed articles, and this is his fifteenth published book. His prior work, King William’s Tontine: Why the Retirement Annuity of the Future Should Resemble Its Past, was awarded the Kulp-Wright Book Award from the American Risk and Insurance Association.

Professor Milevsky is an Associate Editor of Insurance: Mathematics & Economics, as well as The Journal of Pension Economics & Finance. He is also a Fellow of the Fields Institute for Research in Mathematical Sciences, where he was previously a member of the board of directors and active in their scientific and commercial activities.

In addition to his scholarly work Professor Milevsky is a well-known industry consultant, keynote speaker and fin-tech entrepreneur, with a number of U.S. patents. He was named by Investment Advisor Magazine as one of the 35 most influential people in the U.S. financial advisory business during the last 35 years and received a lifetime achievement award from the Retirement Income Industry Association. He recently joined forces with Guardian Capital Group (Canada) to help implement many of the ideas contained in this book.
Show all