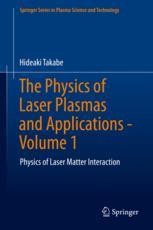 The Physics of Laser Plasmas and Applications - Volume 1

The series of books discusses the physics of laser and matter interaction, fluid dynamics of high-temperature and high-density compressible plasma, and kinetic phenomena and particle dynamics in laser-produced plasma. The book (Vol.1) gives the physics of intense-laser absorption in matter and/or plasma in non-relativistic and relativistic laser-intensity regime. In many cases, it is explained with clear images of physics so that an intuitive understanding of individual physics is possible for non-specialists.

For intense-laser of 1013-16 W/cm2, the laser energy is mainly absorbed via collisional process, where the oscillation energy is converted to thermal energy by non-adiabatic Coulomb collision with the ions. Collisionless interactions with the collective modes in plasma are also described. The main topics are the interaction of ultra-intense laser and plasma for the intensity near and over 1018W/cm2. In such regime, relativistic dynamics become essential.

A new physics appears due to the relativistic effects, such as mass correction, relativistic nonlinear force, chaos physics of particle motions, and so on. The book provides clearly the theoretical base for challenging the laser-plasma interaction physics in the wide range of power lasers.

It is suitable as a textbook for upper-undergraduate and graduate students as well as for readers who want to understand the whole physics structure about what happen when an intense-laser irradiates any materials including solids, gas etc. Explaining the physics intuitively without complicated mathematics, it is also a valuable resource for engineering students and researchers as well as for self-study.

Professor, Institute of Radiation Physics, Helmholtz Zentrum Dresden Rossendorf (HZDR), Dresden, Germany and Professor-Emeritus, Osaka University, Japan. He received a Ph.D. degree from Osaka University and continued research at Max-Planck Institute for Plasma Physics, Germany, and the University of Arizona, USA. After that, he worked for the Institute of Laser Engineering, Osaka University until early-retirement in 2015. His research fields are plasma physics, laser fusion, laboratory astrophysics, and HED physics. He is known for Takabe formula in laser fusion and also proposed the new field of laboratory astrophysics with intense lasers. He has taught Plasma Physics and Computational Physics in the School of Engineering and School of Science for more than 20 years. He committed the globalization of Osaka University. He was also council members of both of the Physical Societies of Japan (JPS) and the Association of Asia-Pacific Physical Society (AAPPS), where he founded the division of plasma physics (DPP). He received the Edward Teller medal in 2003. He is a fellow of the American Physical Society.