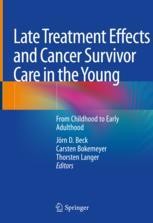 Late Treatment Effects and Cancer Survivor Care in the Young

From Childhood to Early Adulthood

This comprehensive guide describes the aftercare that is appropriate in young cancer patients and discusses in detail the risk and detection of treatment sequelae. It explains the impacts on body and mind of both the disease itself and the different risk-adapted cancer treatments currently in use. Clear guidance is provided on diagnosis and management of the principal treatment-related toxicities in different organs and organ systems and for a wide variety of tumor types. In addition, the role of genetic polymorphisms in the development of adverse therapy-related outcomes is explored, and advice offered on genetic counselling. As the number of long-term survivors of childhood cancer and of cancer in young adults continues to grow, so issues surrounding potential sequelae, second malignancies, and quality of life are becoming ever more important. All practitioners involved in the care of young cancer patients will find this book to be a helpful source of up-to-date information and assistance.

Thorsten Langer is Professor in Pediatric Oncology for patient-centered long-term follow-up research at the University of Luebeck. Professor Langer graduated from the Faculty of Medicine of Justus-Liebig University Giessen in 1995. Commencing in 1994 he trained as a pediatrician at the University Hospital for Children and Adolescents, Friedrich-Alexander University Erlangen-Nuremberg. He joined also the research team of Prof. Beck and became also a very active and permanent member of Prof. Becks research team. He has been registered as a pediatrician since 2004 and as a pediatric hemato-oncologist since 2008. In 2005 he defended his PhD thesis on “Late effects after antineoplastic treatments in children and adolescents” using the German Late Effects Surveillance System clinical database for his research. Since 2007 he has chaired the working group “Late Effects Surveillance System” (LESS), and since 2011, the working party “Long-Term Follow-up After Childhood Cancer”. In 2012 he became chair of the German Society of Pediatric Oncology and Hematology (GPOH) research committee “Long-Term Complications”. J.D. Beck remained after his retirement a member of these research groups of Thorsten Langer. In the Pan European research group PanCareLIFE Thorsten Langer chaired the work package “clinical and genetic risk factors for ototoxicty”, contributed to the International Guideline Harmonisation Group and to the German AWMF guideline Long-term follow up guidelines after childhood cancer.

Carsten Bokemeyer is Professor for Internal Medicine and Director of the Department of Internal Medicine II (Oncology, Haematology, BMT with Devison of Pneumology) at the Oncology Center, University Hospital Hamburg-Eppendorf, Hamburg, Germany. He previously served as chairman and director of the executive board of the University Cancer Center Hamburg (UCCH). Professor Bokemeyer has been a Visiting Research Professor at the Erasmus University in Rotterdam, the Netherlands, and spend one year of trainining and laboratory reserch work at the Memorial Sloan-Kettering Cancer Center in New York, USA. He served as Chair of the German Geriatric Oncology Group from 2000 to 2013, is a member of the EORTC GI group and chairs the German Testicular Cancer Study Group since 2009. He has won various awards, including in 2014 the prestigious ESMO Award for his work in translating experimental findings in the field of colorectal and urogenital malignancies into clinical benefit for patients. Treatment related side effects and late toxicity have a a focus of his clinical scientific work for more than 20 years. He serves on several editorial boards on oncological journals including the Annals of Oncology and he is member of several national and international guideline groups. He has authored or co-authored more than 750 peer-reviewed scientific manuscripts and reviews and has edited a number of books on oncology with particular reference to topics in supportive care. He is vice president of the Hamburg Cancer Society and had been elected as president and vice president of the German Society of Haematology and Oncology for 2016–7 and 2018-2019, respectively. Since 2019 he is also the chair of the network of comprehensive cancer centers in Germany.

Dr. Joern D. Beck is a retired Professor of Pediatrics and Pediatric Oncology at the Children’s Hospital of the Friedrich-Alexander-University Erlangen-Nuernberg, Germany. He graduated at the University of Marburg and Munich.

After his appointment as Physician he worked for two years as a scientific assistant on DNA repair at the Biochemical Institut of the Johannes Gutenberg University Mainz. For his training as pediatrician he moved to the Children’s Hospital of the same University and started working also with cancer patients.

With a grant of the Deutsche Forschungsgemeinschaft he joined 1977 the Memorial Sloan Kettering Cancer Center, New York.  He worked as research assistant in R.A. Good` s group not only  in Immunology and Bone Marrow Transplantation, but he established also  for the Pediatric Department  a program for the classification of leukemic cells, and participated in the therapy of cancer patients.

After almost four years in New York, he went upon invitation to the University of Erlangen developing a team of young oncologists, and setting up at the Children’s Hospital a Department for Oncology, Immunology, and Bone Marrow Transplantation, with special attention to children and adolescents with high risk leukemia.

The team of J.D. Beck introduced also the preparation of hematological stem cells from peripheral as well umbilical blood at the University of Erlangen.

The author worked in many study commissions of the German Society of Pediatric Oncology and Hematology (GPOH) for the development of the oncological front line therapy.

Upon request of this scientific society in 1988 he set up as head of the Late Effects Working group with a team of experts a nationwide follow up program for pediatric and young cancer survivors. This group was developed further to the Late Effects Surveillance System, LESS, which he chaired until 2006, contributing also to the German AWMF guideline, Long-term follow up guidelines after childhood cancer.

In 1990 he was a cofounder of the Early and Late Toxicity Education Committee within the  International I-BFM Study Group, the PanCare network in 2008, later on the European PanCareSurfup  and PanCareLife projects. For the PanCareSurfup project he served as a member of the Ethical and Scientific Advisory Board until 2017.

J. D. Beck was honoured with two awards for his work in late effects research, and survivorship care, respectively.

The author is deeply thankful for having been a witness of the progress in childhood cancer therapy over the last decades, and feels also a kind of priviliged for having been an active member of a world-wide group of hard-working scientists and care providers, united by the same goals to conquer the scourge of  cancer in the young, ignoring all kinds of differences such as language, nationality, race, or political attitudes.

His legacy for our younger colleagues: “Hold on tight to your dreams! Even the smallest steps forward may be a source of happiness.”