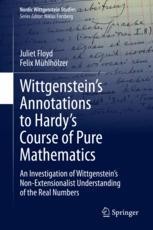 This monograph examines the private annotations that Ludwig Wittgenstein made to his copy of G.H. Hardy’s classic textbook, A Course of Pure Mathematics. Complete with actual images of the annotations, it gives readers a more complete picture of Wittgenstein’s remarks on irrational numbers, which have only been published in an excerpted form and, as a result, have often been unjustly criticized.

The authors first establish the context behind the annotations and discuss the historical role of Hardy’s textbook. They then go on to outline Wittgenstein’s non-extensionalist point of view on real numbers, assessing his manuscripts and published remarks and discussing attitudes in play in the philosophy of mathematics since Dedekind. Next, coverage focuses on the annotations themselves. The discussion encompasses irrational numbers, the law of excluded middle in mathematics and the notion of an “improper picture," the continuum of real numbers, and Wittgenstein’s attitude toward functions and limits.

Juliet Floyd is Professor of Philosophy at Boston University, researching the interplay between logic, mathematics, and philosophy in late nineteenth and early twentieth centuries.  She has written extensively on Wittgenstein, Gödel and Turing and also published articles on Kant, the history of American philosophy, aesthetics, and eighteenth century philosophy. She taught at the City College of New York and the Graduate Center, City University of New York (1990-1996) and has been a Visiting Professor of Philosophy at the University of Vienna (2007) the University of Paris I Panthéon-Sorbonne (2009), the University of Bordeaux 3, Université Michel de Montaigne (2012) and a Fellow of the Dibner Institute at MIT (1998-9) and the Lichtenberg-Kolleg, Georg August University, Göttingen (2009-10). She has received grants from the American Academy in Berlin, the American Council of Learned Societies, the Fulbright Association, the American Philosophical Society, the National Endowment for the Humanities, the C.U.N.Y. Research Foundation, and Wellesley College. Professor Floyd is currently Associate Senior Editor in Twentieth Century Philosophy at the Stanford Encyclopedia of Philosophy.  She has co-edited (with S. Shieh) Future Pasts: The Analytic Tradition in Twentieth Century Philosophy (Oxford, 2001), (with J.E. Katz) Philosophy of Emerging Media: Understanding, Appreciation, Application (Oxford, 2016) and (with A. Bokulich) Philosophical Explorations of the Legacy of Alan Turing; Turing 100 (Springer, forthcoming, Boston Studies in the Philosophy and History of Science).  See http://www.bu.edu/philo/people/faculty/full-time/juliet-floyd/.

Felix Mühlhölzer is Professor of Philosophy at the Georg-August-University of Göttingen since 1997. Before, he taught at the University of Munich from 1989 to 1993 and was Professor of Philosophy of Science and Logic at Dresden University of Technology until 1997. He has published on topics in philosophy of science, especially on space and time, and in philosophy of language. Since 2001 he has written primarily on later Wittgenstein's philosophy of mathematics. His recent works include Braucht die Mathematik eine Grundlegung? Ein Kommentar des Teils III von Wittgensteins "Bemerkungen über die Grundlagen der Mathematik" (2010) and Wissenschaft (2011).He is currently working on a book titled Wittgenstein über Zahlen und Mengen. Mit einem Kommentar des Teils II von Wittgensteins 'Bemerkungen über die Philosophie der Mathematik.