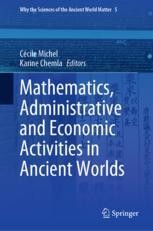 This book focuses on the ancient Near East, early imperial China, South-East Asia, and medieval Europe, shedding light on mathematical knowledge and practices documented by sources relating to the administrative and economic activities of officials, merchants and other actors. It compares these to mathematical texts produced in related school contexts or reflecting the pursuit of mathematics for its own sake to reveal the diversity of mathematical practices in each of these geographical areas of the ancient world. Based on case studies from various periods and political, economic and social contexts, it explores how, in each part of the world discussed, it is possible to identify and describe the different cultures of quantification and computation as well as their points of contact. The thirteen chapters draw on a wide variety of texts from ancient Near East, China, South-East Asia and medieval Europe, which are analyzed by researchers from various fields, including mathematics, history, philology, archaeology and economics. The book will appeal to historians of science, economists and institutional historians of the ancient and medieval world, and also to Assyriologists, Indologists, Sinologists and experts on medieval Europe.

Cécile Michel is a Senior Researcher at the laboratory ArScAn, at the French National Center for Scientific Research (CNRS), (CNRS, Université Paris 1 Panthéon-Sorbonne, Université Paris Nanterre, Ministère de la Culture) and a Professor at Hamburg University. An Assyriologist, she works on Assyrian and Babylonian cuneiform texts from the 2nd millenium BC and conducts research on social and economic history, gender studies, material culture, education, mathematics and literacy. She is a member of the international team in charge of the decipherment of the private archives of Assyrian merchants excavated in central Anatolia. Her publications include Correspondance des marchands de Kaniš au début du IIe millénaire av. J.-C. (Le Cerf, 2001), Women in Aššur and Kaneš from the private archives of Assyrian merchants of the early 2nd millennium BC (SBL, in press), Richesse et sociétés (ed. with C. Baroin, De Boccard 2013), Wool Economy in the Ancient Near East and the Aegean: from the Beginnings of Sheep Husbandry to Institutional Textile Industry (ed. with C. Breniquet, Oxbow Books 2014), and The Role of Women in Work and Society in the Ancient Near East (ed. with B. Lion, Walter de Gruyter 2016).
Karine Chemla is a Senior Researcher at the French National Center for Scientific Research (CNRS), laboratory SPHERE (CNRS & Université de Paris. Her research focuses the historical anthropological aspects of the relationship between mathematics and the various cultures in the context of which it is practiced. Chemla published Les Neuf Chapitres (with Guo Shuchun, Dunod, 2004), and edited The History of Mathematical Proof in Ancient Traditions (Cambridge University Press, 2012); Texts, Textual Acts and the History of Science (with J. Virbel, Springer, 2015); The Oxford Handbook of Generality in Mathematics and the Sciences (with R. Chorlay and D. Rabouin, Oxford University Press, 2016); Numerical Tables and Tabular Layouts in Chinese Scholarly Documents (Special issues of East Asian Science, Technology and Medicine, 43 (2016, March 2017) & 44 (2016, April 2017)); and Cultures without culturalism: The making of scientific knowledge (with Evelyn Fox Keller, Duke University Press, 2017). Chemla is a member of the Deutsche Akademie der Naturforscher Leopoldina (2005), of the Academia Europaea (2013), and of the American Philosophical Society (2019).