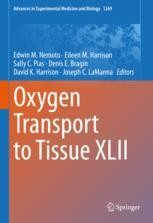 This book presents cutting-edge papers and perspectives on the transport of oxygen to tissues by scientists in a multitude of disciplines such as biochemistry, engineering, mathematics, medicine, physics, physiology, veterinary and complementary medicine. The book is composed of the following 6 parts: Brain Oxygenation and Function, Tumor Oxygenation and Metabolism, Muscle Oxygenation and Sports Medicine, Cell Metabolism and Tissue Oxygenation, Methodology of O2 Measurements, and Special Topics. The articles in this book have been presented at the 42nd annual meeting of the International Society on Oxygen Transport to Tissue (ISOTT 2019) held in Albuquerque, New Mexico, USA, from July 28 to July 31, 2019. Academics, clinical and industry researchers, engineers, as well as graduate students who are interested in oxygen transport to tissue will find this book a great reference and a useful learning resource.

Edwin M. Nemoto, PhD, 1969 in Physiology, Biochemistry and Radiation Physics , Rutgers The State University mentor Dr. Harry M. Frankel.  He studied the effects of hyperthermia on cerebral blood flow regulation and metabolism. Postdoctoral Fellowship (1969-1971) at Cardiovascular Research Institute, UCSF mentor, Dr. John Severinghaus. Studied CSF acid base balance. At the University of Pittsburgh 1972-2009, Department of Anesthesiology and Critical Care Medicine as Director of Anesthesia and CCM research Chair, Dr. Peter Safar, Neurosurgery and Radiology and studied brain circulation and metabolism in cardiac arrest, traumatic brain injury and stroke.  In 2009 at the University of New Mexico, Director of Research of Neurosurgery, under Chair, Dr. Howard Yonas until June, 2020, semiretired and continues his research and work on his startup company, ShearIT, LLC. He hosted ISOTT meetings in Pittsburgh, PA in 1995 and again in Albuquerque, NM in 2019.

Eileen M. Harrison BSc, is a graduate in physiology from St Andrews University and was a freelance medical/pharmaceutical translator for a range of international companies until 2010.

She has been associated with ISOTT for over 35 years and since 2006 she has been Technical Editor of all the “Oxygen Transport to Tissue” volumes. In 2019 she also took on the role of Language Editor following the passing away of Laraine Visser.

Sally C. Pias is Associate Professor of Chemistry and Associate Chair of the Department of Chemistry at the New Mexico Institute of Mining and Technology (New Mexico Tech) in Socorro, NM, USA. She is a computational chemist with a research focus on oxygen transport modeling. She earned a PhD in Chemistry with specialization in Biochemistry from New Mexico State University (USA), then received postdoctoral training in computational chemistry at Stony Brook University (State University of New York, USA) as a Computing Innovation Fellow. Dr. Pias is an active member of the Bioenergetics, Mitochondria, and Metabolism Subgroup of the Biophysical Society. She is a past recipient of ISOTT's Melvin H. Knisely Award and a current member of the ISOTT Executive Committee. Dr. Pias coorganized the ISOTT 2019 meeting, along with Edwin Nemoto and Denis Bragin.

Denis E. Bragin is an Associate Professor of Translational Neurosciences at Lovelace Biomedical Research Institute and Adjunct Associate Professor at the Department of Neurosurgery University of New Mexico School of Medicine, Albuquerque, NM, USA. He is a biophysicist with a research focus on the circulation, oxygen supply, and metabolism of the brain under various pathological conditions. He earned a Ph.D. in Biology with specialization in Biophysics from the Voronezh State University (Russia), then received postdoctoral training in Neurosciences at Neuroscience Research Center (NWFZ), Charité Medical School, Humboldt University, Berlin (Germany) and Department of Neurosurgery, University of New Mexico School of Medicine (USA). Dr. Bragin is an active member of the American Heart/Stroke Association (AHA), the International Society of Cerebral Blood Flow and Metabolism (ISCBFM), the Society of Photo-Optical Instrumentation Engineers (SPIE) and the ISOTT. A Stroke Council of the AHA elected him as a Fellow of the American Heart Association (FAHA). Dr. Bragin co-organized the ISOTT 2019 meeting, along with Edwin Nemoto and Sally Pias.

He is author or co-author of over 130 publications, mainly in the field of blood flow and oxygen transport to tissue. He has been a member of ISOTT for over 35 years including President in 1996. Since 2004 he has been Scientific Editor of all of the “Oxygen Transport to Tissue” volumes.

Joseph C. LaManna, PhD is The Jeannette M. and Joseph S. Silber Professor for the Study of Brain Sciences in the Department of Physiology & Biophysics at Case Western Reserve University. He has been a member of ISOTT since 1974 and served as Past President of the Society (2009).  He is the Series Editor of the ISOTT Proceedings. He has been involved in cerebrovascular research for 40 years.  His research is concerned with brain metabolism, energy and cerebral blood flow, angiogenesis and neurodegeneration. The role of these mechanisms in tissue response to pathological insults (stroke, cardiac arrest and resuscitation, hypoxia) is being actively investigated.  His recent research has centered on ketones, cerebral angiogenesis and the role of hypoxia-inducible factor-1 in physiological adaptation to hypoxia, neuroprotection and ischemic preconditioning.  He has authored or co-authored over 200 research papers and review chapters.
Show all