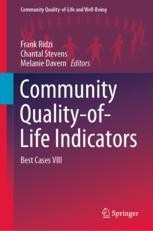 This book offers critical insights into the thriving international field of community indicators, incorporating the experiences of government leaders, philanthropic professionals, community planners and a wide range of academic disciplines. It illuminates the important role of community indicators in diverse settings and the rationale for the development and implementation of these innovative projects.  This book details many of the practical “how to” aspects of the field as well as lessons learned from implementing indicators in practice. The case studies included here also demonstrate how, using a variety of data applications, leaders of today are monitoring and measuring progress and communities are empowered to make sustainable improvements in their wellbeing. With examples related to the environment, economy, planning, community engagement and health, among others, this book epitomizes the constant innovation, collaborative partnerships and the consummate interdisciplinarity of the community indicators field of today.

Frank Ridzi is Vice President for Community Investment at the Central New York Community Foundation, Associate Professor of Sociology at Le Moyne College, President of the Community Indicators Consortium Board and former President of the Literacy Funders Network, an affinity group of the Council on Foundations. Frank has conducted research and written in the areas of literacy coalitions, sociology of work, and student affairs. His writings have appeared in such places as the Foundation Review, the Journal of Applied Social Sciences, the Journal of Organizational Change Management, and Review of Policy Research.

Frank holds a Masters Degree in Public Administration and a Ph.D. in Sociology from Syracuse University’s Maxwell School. He also carries a Certificate of Advanced Study in Women’s Studies. Prior to joining the Community Foundation, he served as Director for the Center of Urban and Regional Applied Research at Le Moyne College, where he still serves as Associate Professor of Sociology.

Melanie T. Davern (PhD) is a Senior Research Fellow, Director of the Australian Urban Observatory, and Co-Director of the Healthy Liveable Cities Group within the Centre for Urban Research at RMIT University, Melbourne, Victoria and an Honorary Senior Research Fellow, School of Population and Global Health, University of Melbourne (Australia). Melanie has specific expertise in the development and application of policy and practice-based social, economic and environmental indicators that support evidence-based policy and planning. These indicators are specifically curated applied research translation tools based on academic research and constructed to measure the broad social determinants of health or liveability across Australian communities. Indicators are used in applied local, state and federal government settings as measurement tools for policy development, program evaluation, knowledge translation, improved data literacy and evidence informed community engagement. Melanie has contributed to previous editions of the Community Quality-of-Life Indicators Best Cases series and was instrumental in the development of Community Indicators Victoria as the first state based indicator system in Australia.

Chantal Stevens has been the executive director of the Community Indicators Consortium since 2013, having previously served on its board between 2005 and 2008 and again in 2012. She’s also an experienced nonprofit manager who was formerly the executive director of Sustainable Seattle, a pioneer in the development of community indicators, and the Starflower Foundation.  More recently she has worked for King County as the oversight manager of the Countywide Community Forums and as a performance management analyst.

She co-edited Community Quality-of-Life Indicators: Best Cases VII and contributed to its introduction.  She has presented at multiple conferences (APA, ASPA, CIC, …) on topics related to community indicators, performance management and public engagement; was a guest lecturer at University of Hyogo; was co-lead of the first conference dedicated to the exploration of CI-PM integration in 2006; and is an active advocate for community indicators and public engagement as a key element of a functioning performance management system in the public and nonprofit sectors.

She holds a BS and MMA from the University of Washington in Seattle.
Show all