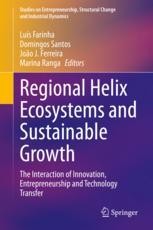 The Interaction of Innovation, Entrepreneurship and Technology Transfer

Luís Farinha is an Adjunct Professor at the Polytechnic Institute of Castelo Branco, and Assistant Professor and researcher at the University of Beira Interior (Portugal). He is the founder and Dean of the Regional Helix – International Conference, and is Vice President of InovCluster, a nationally and internationally recognized center of excellence in the agro-industrial sector. He is the co-editor of two books: Handbook of Research on Global Competitive Advantage through Innovation and Entrepreneurship, and Multiple Helix Ecosystems for Sustainable Competitiveness (Springer, 2016), and has published several journal articles and book chapters.

João J. Ferreira is an Associate Professor at University of Beira Interior, Portugal. He completed the European Doctoral Programme on Entrepreneurship and Small Business Management at the Autonomous University of Barcelona, Spain. He is currently the scientific coordinator of NECE – a research unit on business sciences. He has published several articles in international journals and has edited a number of international books.

Marina Ranga works with the European Commission’s Joint Research Centre in Seville, Spain, and is also an Associate Professor at the University of Warsaw's School of Management. She has held academic positions at Stanford University and at several universities in Europe. She also carries out consultancy and evaluation work for the European Commission and the European Institute of Innovation and Technology, the UN Economic Commission for Europe, and national and regional government innovation agencies. She chairs the Strategic Advisory Board of Imperial College’s Institute for Molecular Science and Engineering and is a member of the International Advisory Board of the Accreditation Council for Entrepreneurial and Engaged Universities and of the Scientific Board of the University-Industry Innovation Network (UIIN).