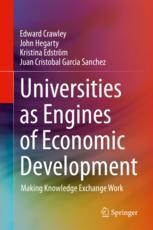 Universities as Engines of Economic Development

This book describes patterns of behavior that collectively allow universities to exchange knowledge more effectively with industry, accelerate innovation and eventually contribute to economic development. These are based on the effective practices of leading and ambitious universities around the world that the authors have benchmarked, and the personal experiences of the authors in a number of international institution building projects, including those of MIT.

The authors provide guidance that is globally applicable, but must be locally adapted. The approach is first to describe the context in which universities act as engines of economic development, and then present a set of effective practices in four domains: education, research, innovation, and supporting practices. Each of these domains has three to six practices, and each practice is presented in a similar template, with an abstract, a rationale and description, key actions and one or two mini-case studies. The practices are summarized by integrative case studies.

Edward Crawley is the Ford Professor of Engineering, and a Professor of Aeronautics and Astronautics at MIT. He has served as the founding President of the Skolkovo Institute of Science and Technology (Skoltech) in Moscow, the founding Director of the MIT Gordon Engineering Leadership Program, the co-founder of the international CDIO initiative, the Director of the Cambridge (UK) - MIT Institute and the Head of the Department of Aeronautics and Astronautics at MIT. Crawley’s research has focused on the architecture, design, and decision support and optimization in complex technical systems subject to economic and stakeholder constraints. His book System Architecture: Strategy and Product Development for Complex Systems was published by Pearson (2016). His work in innovation includes helping to found six technology-based startups. Crawley is a Fellow of the AIAA, the Royal Aeronautical Society (UK) and the International Academy of Astronautics. He is a member of the US National Academy of Engineering and is a foreign member of national academies of of Sweden, the UK, China and Russia.He received an SB (1976) and an SM (1978) in aeronautics and astronautics and a ScD (1981) in aerospace structures, all from MIT, and has been awarded two honorary doctorates.

John Hegarty served as President/Provost (2001-11) at Trinity College Dublin and, previously, as Dean of Research, Head of the Physics Department and Professor of Laser Physics. He spent nine years in the US at the University of Wisconsin-Madison and at AT&T Bell Labs. As President, he led a significant expansion of Trinity College’s research and innovation mission, including engagement between disciplines and with stakeholders, as part of a wider change and modernization program. Hegarty’s field of research was photonics, resulting in more than 100 publications in peer-reviewed journals, three patents and one spin-off company. He co-founded Optronics Ireland (1999), a national research program in photonics involving strong cross-disciplinary collaboration among five universities.He co-founded Innovation Advisory Partners in 2012 to provide advisory services on research and innovation, and acted as Senior Advisor to the President of the start-up university, Skoltech.  He is a member of several boards including the those of the Irish Times, Hugh Lane Gallery and Ireland Fulbright Commission.Hegarty received a BSc (1969) and PhD (1975) from the National University of Ireland and an ScD (2001) from Trinity College Dublin. He has three honorary doctorates. He is a Fellow of the Royal Irish Academy and the Institute of Physics, and a Fellow Emeritus at Trinity College Dublin.

Kristina Edström is an Associate Professor in Engineering Education Development at KTH Royal Institute of Technology. Since 1997 she has participated in and led educational development on a national and international level. Her focus is on enhancement of courses and curricula, and of faculty teaching competence.Edström has been active since 2001 in the CDIO Initiative, an international engineering education collaboration. She serves on the CDIO Council and leads the research track in the annual international CDIO conference. During 2012–2013 she was Director of Educational Development at the Skolkovo Institute of Science and Technology. Since 2018 Edström is the Editor-in-Chief of the European Journal of Engineering Education, published by the European Society for Engineering Education. Her research takes a critical perspective on the why, what and how of engineering education development. She investigated tensions between the academic and professional aspects of engineering education. One particular focus is on institutional conditions, such as faculty recruitment and promotion practices.Edström has a MSc in Engineering from Chalmers, and a PhD in Technology and Learning from KTH. Edström was awarded the KTH Prize for Outstanding Achievements in Education in 2004 and elected lifetime honorary member of the KTH Student Union in 2009. She has presented more than one- hundred invited talks at conferences and universities worldwide.

Cristobal Garcia Sanchez has led more than one-hundred innovation projects in Mexico, France, China, and the United States for the education, high tech, and consumer sectors. He has directed comprehensive innovation programs for six universities, with responsibilities ranging from opening new campuses and boosting learning programs to managing turnarounds that transform culture, multiply enrollment and thrive financially. Garcia Sanchez has worked with eight industry clusters to promote thousands of small and midsize enterprises. For the Mexican state Secretariat of the Economy, he designed a communication campaign to promote the Mexican “Silicon Valley.” He led the innovation strategy for the first technology park in Mexico and for the first software center in western Mexico. He is a serial entrepreneur and co-founder of a think tank for sustainable innovation.He is the author and editor of 20 books, some of which were government co-sponsored to support economic and cultural development. He is a recipient of the HarperCollins Award, the Grossman Award, and the MIT-SDM Award for Leadership, Innovation, and Systems Thinking.Garcia Sanchez is a doctoral candidate at the University of Pennsylvania. He received an MSc in Engineering and Management from MIT, a Master’s in Education from the University of Pennsylvania and a multidisciplinary master’s degree from New York University.