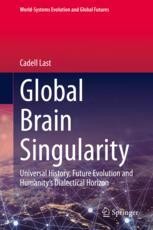 This book introduces readers to global brain singularity through a logical meditation on the temporal dynamics of the universal process. Global brain singularity is conceived of as a future metasystem of human civilization that represents a qualitatively higher coherence of order.
To better understand the potential of this phenomenon, the book begins with an overview of universal history. The focus then shifts to the structure of human systems, and the notion that contemporary global civilization must mediate the emergence of a commons that will transform the future of politics, economics and psychosocial life in general. In this context the book presents our species as biocultural evolutionary agents attempting to create a novel and independent domain of technocultural evolution that affords us new levels of freedom.
Lastly, the book underscores the internal depths of the present moment, structured by a division between subject and object.  The nature of the interaction between subject and object would appear to govern the mechanics of a spiritual process that is key to understanding the meaning of singularity inclusive of observers. Given its scope, the book will appeal to readers interested in systems approaches to the emerging world society, especially historians, philosophers and social scientists.

Cadell Last is a philosopher with an interdisciplinary background in fields of evolutionary anthropology, psychoanalysis, complexity science and big history. He has spent much of his life searching for the truth of being through questions about the difference between humans and nature, and the consequences of human difference for nature.

“This book is an impressive piece of scholarship, integrating results from disciplines as diverse as history, cosmology, philosophy and economics in order to understand the changes in our present information society. These changes are so drastic that they point to a singularity, i.e. a discontinuous transition to a wholly different regime. The author lucidly reviews the main scenarios for this "singular" future that have been proposed by contemporary academics, pointing out their strengths and weaknesses.” (Dr. Francis Heylighen, Cyberneticist and pioneer of the Global Brain concept)

“Cadell Last’s book is an impressive exploration of scientific, economic, social, political and psychological dimensions of the major transition we are living in. A must read for anybody interested in the future of humanity.” (Dr. Clement Vidal, Philosopher and author of The Beginning and the End)

“Cadell Last presents an ambitious take on the interrelation between several grandest themes of human theorising and does so with erudition and excellent style. Combining the conceptual frameworks of evolution, big history and psychoanalysis with futuristic metaphors of the Singularity and the Global Brain, he draws a line that connects the universe with the depth of the human mind, looping the latter as an increasingly potent creator of the former. While this idea is perhaps easier understood in relation to the (human) mind, he adds the concept of the Global Brain to the picture, pointing to the entire web of the technologically mediated human interactions as the proper locus of the creative cognitive power in/of the universe.” (Dr. Marta Lenartowicz, Social Scientist and director of the School of Thinking)

“Cadell’s book offers a valuable contribution both to the development of the general theory of social macroevolution and to the study of the 21st century singularity.  It employs the big history perspective in a rather appropriate way.  In addition to its profound scientific value the book is distinguished by a certain rather charming artistry.” (Dr. Andrey Korotayev, Interdisciplinary Scientist and pioneer of World-Systems Theory)

“It is not every day that one has the opportunity to delve into such thought-provoking piece of academic work.  The author uses philosophy to explore and hopefully address past shortcomings in understanding the immanence of both humans beings and civilization. For such an understanding one needs to tackle reality as a whole, being willing to speculate and make daring conjectures. Cadell’s work achieve this by analysing and exploring important scientific results and manages to better contextualize them within a big picture framework of evolution." (Dr. Alexandre Pais, Mathematician, Educator, and Scholar of Jacques Lacan)