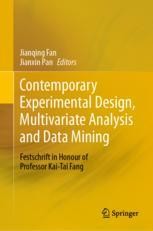 The collection and analysis of data play an important role in many ﬁelds of science and technology, such as computational biology, quantitative ﬁnance, information engineering, machine learning, neuroscience, medicine, and the social sciences. Especially in the era of big data, researchers can easily collect data characterised by massive dimensions and complexity.

In celebration of Professor Kai-Tai Fang’s 80th birthday, we present this book, which furthers new and exciting developments in modern statistical theories, methods and applications. The book features four review papers on Professor Fang’s numerous contributions to the fields of experimental design, multivariate analysis, data mining and education. It also contains twenty research articles contributed by prominent and active figures in their fields. The articles cover a wide range of important topics such as experimental design, multivariate analysis, data mining, hypothesis testing and statistical models.
Show all
About the authors

Jianqing Fan is the Frederick L. Moore Professor at Princeton University.  After receiving his Ph.D. from the University of California at Berkeley, he was appointed a professor at the University of North Carolina at Chapel Hill (1989-2003), the University of California at Los Angeles (1997-2000), Chinese University of Hong Kong (2000-2003) and Princeton University (2003-present). A past president of the Institute of Mathematical Statistics and International Chinese Statistical Association, he is currently a co-editor of the Journal of Business and Economics Statistics and a former co-editor of Annals of Statistics, Probability Theory and Related Fields, and Journal of Econometrics. His published work on statistics, economics, finance, and computational biology has been recognized with the 2000 COPSS President’s Award, the 2007 Morningside Gold Medal of Applied Mathematics, Guggenheim Fellowship, P.L. Hsu Prize, Guy medal, Noether Senior Scholar Award. He is also member of the Academia Sinica, IMS, ASA, AAAS and SoFiE.

Jianxin Pan is a Professor of Statistics at the Department of Mathematics, The University of Manchester. He received his Ph.D. from Hong Kong Baptist University in 1996, and was a Research Associate at the Rothamsted Experiment Station (1996-1999) and the University of St Andrews (1999-2000). He was a Lecturer at Keele University (2000-2002), and has been a Professor of Statistics at the University of Manchester since 2006. He was the Head of the Probability and Statistics Group at the School of Mathematics (2009-2012), and has been a Fellow of the Royal Statistical Society and Elected Member of the International Statistical Institute, both since 2007. He is an Associate Editor for Biometrics (2008-2018), Biometrical Journal (2016-present) and Journal of Multivariate Analysis (2019-present), a Turing Fellow at The Alan Turing Institute for data science and artificial intelligence and Chair of the Royal Statistical Society Manchester Group.