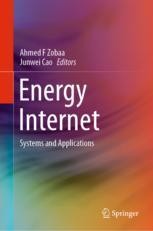 This textbook is the first of its kind to comprehensively describe the energy Internet, a vast network that efficiently supplies electricity to anyone anywhere and is an internet based wide area network for information and energy fusion. The chapters are organized into five parts: Architecture and Design, Energy Switching and Routing, Information and Communication, Energy Management Systems and Energy Market and Trading, and capture the spectrum of this exponential transformation, while also presenting the plethora of open problems that this transformation poses for researchers from mixed academic backgrounds. The scope includes key technologies on distributed energy sources, microgrids, energy storage, solar and wind energy, power grid, smart grid, power quality, power electronics, data centers, distributed computing and networking, cloud computing and big data, and software-defined networking. The book presents the basic principles of energy internet and emphasizes the current research trends in the field of energy Internet at an advanced level. It includes instructor materials, case-studies, and worked examples throughout.
This is an ideal resource for students in advanced graduate-level courses and special topics in energy, information and control systems, and is a useful tool for utility engineers who seek an intuitive understanding of the emerging applications of energy Internet.

Ahmed Faheem Zobaa received the B.Sc.(Hons), M.Sc., and Ph.D. degrees in electrical power and machines from Cairo University, Egypt, in 1992, 1997, and 2002, respectively. From 2007 to 2010, he was a Senior Lecturer in renewable energy at University of Exeter, U.K.  He was also an Instructor from 1992 to 1997, a Teaching Assistant from 1997 to 2002, an Assistant Professor from 2003 to 2008, an Associate Professor from 2008 to 2013 at Cairo University where he has also been a Professor (on leave) since December 2013. Currently, he is a Senior Lecturer in power systems, an MSc Course Director and a Full Member of the Institute of Energy Futures at Brunel University London, U.K. His main areas of expertise are power quality, (marine) renewable energy, smart grids, energy efficiency, and lighting applications.

Dr. Zobaa is an Editor-in-Chief for the International Journal of Renewable Energy Technology, Technology and Economics of Smart Grids and Sustainable Energy, and International Journal of Electrical Engineering Education. He is also an Editorial Board member, Editor, Associate Editor, and Editorial Advisory Board member for many international journals. He is a registered Chartered Engineer, Chartered Energy Engineer, European Engineer, and International Professional Engineer. He is also a registered member of the Engineering Council U.K., Egypt Syndicate of Engineers, and the Egyptian Society of Engineers. He is a Senior Fellow of the Higher Education Academy of U.K. He is a Fellow of the Institution of Engineering and Technology, the Energy Institute of U.K., the Chartered Institution of Building Services Engineers, the Institution of Mechanical Engineers, the Royal Society of Arts, the African Academy of Science, and the Chartered Institute of Educational Assessors. He is a senior member of the Institute of Electrical and Electronics Engineers. Also, He is a member of the International Solar Energy Society, the European Power Electronics and Drives Association, and the IEEE Standards Association.

Junwei Cao received his Ph.D. in computer science from the University of Warwick, Coventry, UK, in 2001. He received his bachelor and master degrees in control theories and engineering in 1998 and 1996, respectively, both from Tsinghua University, Beijing, China. He is currently Professor and Vice Dean of Research Institute of Information Technology, Tsinghua University, Beijing, China. He is also Director of Open Platform and Technology Division, Tsinghua National Laboratory for Information Science and Technology.  Prior to joining Tsinghua University in 2006, he was a Research Scientist at MIT LIGO Laboratory and NEC Laboratories Europe for about 5 years. He has published over 200 papers and cited by international scholars for over 18,000 times. He has authored or edited 8 books. His research is focused on distributed computing technologies and energy/power applications. Prof. Cao is a Senior Member of the IEEE Computer Society and a Member of the ACM and CCF.