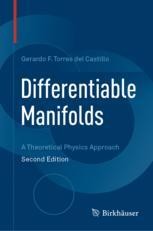 This textbook gives a concise introduction to the theory of differentiable manifolds, focusing on their applications to differential equations, differential geometry, and Hamiltonian mechanics.

The first three chapters introduce the basic concepts of the theory, such as differentiable maps, tangent vectors, vector and tensor fields, differential forms, local one-parameter groups of diffeomorphisms, and Lie derivatives. These tools are subsequently employed in the study of differential equations, connections, Riemannian manifolds, Lie groups, and Hamiltonian mechanics. Throughout, the book contains examples, worked out in detail, as well as exercises intended to show how the formalism is applied to actual computations and to emphasize the connections among various areas of mathematics.

This second edition greatly expands upon the first by including more examples, additional exercises, and new topics, such as the moment map and fiber bundles. Detailed solutions to every exercise are also provided.

Differentiable Manifolds is addressed to advanced undergraduate or beginning graduate students in mathematics or physics. Prerequisites include multivariable calculus, linear algebra, differential equations, and a basic knowledge of analytical mechanics

This book presents an introduction to differential geometry and the calculus on manifolds with a view on some of its applications in physics. … The present author has succeeded in writing a book which has its own flavor and its own emphasis, which makes it certainly a valuable addition to the literature on the subject. Frans Cantrijn, Mathematical Reviews

Gerardo F. Torres del Castillo is a professor of physics and mathematics at the Universidad Autónoma de Puebla, where he has taught since 1979. He is the author or coauthor of more than 30 papers on classical mechanics. His other published books are Differentiable Manifolds; 3-D Spinors, Spin-Weighted Functions and their Applications; and Spinors in Four-Dimensional Spaces.