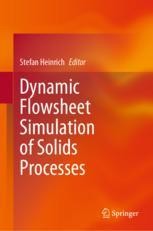 This book presents the latest advances in flowsheet simulation of solids processes, focusing on the dynamic behaviour of systems with interconnected solids processing units, but also covering stationary simulation. The book includes the modelling of solids processing units, for example for comminution, sifting and particle formulation and also for reaction systems. Furthermore, it examines new approaches for the description of solids and their property distributions and for the mathematical treatment of flowsheets with multivariate population balances.

Stefan Heinrich studied Process Engineering at the University of Magdeburg, and received his Diploma and Ph.D. in the field of fluidized bed spray granulation from the same university in 1996 and 2000 respectively. From 2000 to 2002, he was an Assistant Professor, and from 2002 to 2008 a Junior Professor at the University of Magdeburg, where he also received his habilitation (postdoctoral degree) and “venia legend” in Particle Technology in 2006. In 2008, he became a Professor and Director of the Institute of Solids Process Engineering and Particle Technology at the Hamburg University of Technology, Germany. From 2011–2012, he was also the Dean of the Department of Process and Chemical Engineering at the Hamburg University of Technology. In 2015, Stefan became an Honorary Doctor of the DonNTU (National University of the Ukraine).