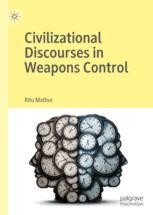 This book seeks to decolonize practices of arms control and disarmament. In this endeavor it seeks to problematize our understanding of time and civilization as rhetorical resources. The need for such an undertaking can be premised on the claim that while problems of modernity, ethnocentrism and universalism are now a central concern within the field of international relations, these ideas are scarcely debated or contested within the field of arms control and disarmament. The singular focus on technological innovations and specific policy-oriented agreements in practices of arms control and disarmament appears to stymie the need for such engagements. This book is an invitation to explore intersecting discourses on colonialism, racialism, nationalism and humanitarianism within a historically grounded terrain of weapons control. An understanding of these practices is vital not to prescribe any standards of civilization or exceptionalism in weapons control but to be cognizant through critique of the dangers embedded in any effort at reconstellating the constitutional nuclear order.

Ritu Mathur is Associate Professor in the Department of Political Science and Geography at the University of Texas at San Antonio, USA.

“Ritu Mathur is an important young scholar offering a vibrant and original postcolonial critique of the stale discourse of international security and arms control that has become ingrown in the West.  She offers the fresh perspective on nuclear weapons policy that we so badly need at this moment when the existing nuclear order is crumbling.  Her writing reminds us that not only white male voices should be heard on nuclear weapons.  Her work is intellectually innovative and important and, if policy-makers will pay attention, practically relevant.”

“This is an essential book for every student of arms control and disarmament. Ritu Mathur shows why arms control was in decline long before populist strongmen shoved it in the grave. Deploying sly civility and mimesis, Mathur offers the most persuasive explanation for the failure of arms control to globalize. She explains why advocates could not see the limits of its appeal or the limits of it future. If disarmament is to recover its future, it starts here.”

"The question of who is considered sufficiently civilized to wield nuclear weapons fundamentally shapes the diplomacy of arms control and disarmament. Yet only a very few scholars have sought to explore just how. In this carefully crafted intervention, Ritu Mathur shows us how historical geographies of race and civilization determine the standards of nuclear civilization. She uncovers the hidden histories of empire and colonial discourse that lie behind the policy science of arms control. In doing so, she shows us what a decolonized debate over nuclear weapons might look like."

“This important new book makes an original contribution on the social technologies of nuclear governance and the unequal worlds they make and by which they are in turn made. Bringing postcolonial insights and decolonial sensibilities to incisive analysis of the architecture of nuclear weapons management, it not only deepens our understanding of the prevailing nuclear order but demands too that we think beyond extant debates around the control and spread of nuclear arms. In so doing, it raises new possibilities for reading against the grain of civilizational narratives congenitally entangled with dominant nuclear discourses and thereby to imagine a fuller range of possibilities toward a world less imperiled by both.”