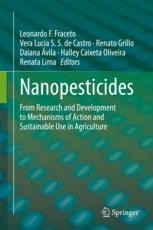 Leonardo F. Fraceto holds a PhD in Molecular and Functional Biology from São Paulo State University, where he has developed carrier systems for herbicides and other compounds of interest for pest control in agriculture, resulting in research articles and patents. In addition, he has conducted studies on long-term repellents for controlling arboviruses and pests.

Renato Grillo is a Professor of Chemistry and Biochemistry at São Paulo State University. He received his PhD and MS degrees from the University of Campinas and was a post-doc at the International Iberian Nanotechnology Laboratory and Federal University of ABC. He is an expert on environmental nanotechnology, including the development of nanostructured solutions for the controlled release of pesticides, interactions of nanomaterials with natural colloids, exposure and risk assessment.

Daiana Ávila holds a PhD in Toxicological Biochemistry from the Federal University of Santa Maria and completed her postdoc at Vanderbilt University. Currently an Associate Professor at the Federal University of Pampa, her research focuses on nanotoxicology using Caenorhabditis elegans as an alternative animal model. She received the “For Woman in Science- L´Oreal/UNESCO/ABC” Award in 2015.

Halley Caixeta Oliveira holds a PhD in Molecular and Functional Biology from the State University of Campinas and completed his postdoc in Plant Physiology at the same institution. He is currently an Associate Professor at the State University of Londrina. An expert on plant biochemistry and physiology, his research focuses on how plants respond to abiotic stresses and how we can improve plant performance in a scenario of climate change by exploring the application of nanotechnology in agriculture and the plant sciences.