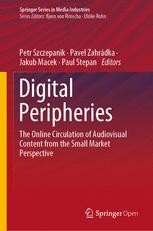 The Online Circulation of Audiovisual Content from the Small Market Perspective

This is an open access book. Media industry research and EU policymaking are predominantly tailored to large (and, in the latter case, Western) European markets. This open access book addresses the specific qualities of smaller media markets, highlighting their vulnerability to global digital competition and outlining survival strategies for them. New online distribution models and new trends in the consumption of audiovisual content are limited by, and pose new challenges for, existing audiovisual business models and their legal framework in the EU. The European Commission’s Digital Single Market (DSM) strategy, which was intended e.g. to remove obstacles to the cross-border distribution of audiovisual content, has triggered a heated debate on the transformation of the existing ecosystem for European screen industries. While most current discussions focus on the United States, Western Europe, and the multinational giants, this book approaches these industry trends and policy questions from the perspective of relatively small and peripheral (in terms of their population, language, cross-border cultural flows, and financial and/or symbolic capital) media markets.

Petr Szczepanik is an Associate Professor at Charles University, Prague (Czech Republic). His current research focuses on East-Central European screen industries, production cultures, and public service media in the internet era. His historical research on the state socialist mode of film production was published in the book ‘Behind the Screen: Inside European Production Culture’ (Palgrave, co-edited with Patrick Vonderau, 2013).

Paul Stepan teaches Cultural Economics, Economics of Copyright and Economics of Cultural and Creative Industries at the University for Music and Performing Arts Vienna (Austria) and at Palacký University Olomouc (Czech Republic). His research focuses on the impact of digitization on the cultural and media sector in general with emphasis on the film industry.

“By turns authoritatively technical, challengingly theoretical, and sharply practical, Digital Peripheries reminds us that national boundaries and differences in scale matter now as much as before global-digital integration. 20/20 vision from the periphery tells us as much about the power and limits of the centre as it does its outskirts.” (Stuart Cunningham (Queensland University of Technology), co-author of Social Media Entertainment and Screen Distribution and the New King Kongs of the Online World)

“The story of audiovisual industries caught between cultural diversity and the single market as well as between national markets and global digital connectedness convincingly retold from the peripheries rather than from the global centre.” (Thomas Dreier (Karlsruhe Institute of Technology), co-author of European Intellectual Property Law)

“Size matters, at least in regard to media industries. More than in the broadcasting era, it is the scale of markets and the boundaries drawn between them that effect how cultural content is distributed online. But Europe’s many small markets are not simply miniature versions of the hegemonic ones. As this collection strikingly demonstrates, peripheral markets may become a central vantage point from which to chart and re-theorize the impacts of globalization. As a European contribution to a nascent field, this book engages in a cross-disciplinary dialogue resulting in rich insights on the relations between transnational platforms, local industries, regulators, and the public.” (Patrick Vonderau (Martin Luther University of Halle-Wittenberg), co-author of Spotify Teardown. Inside the Black Box of Streaming Music)