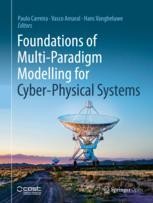 This open access book coherently gathers well-founded information on the fundamentals of and formalisms for modelling cyber-physical systems (CPS). Highlighting the cross-disciplinary nature of CPS modelling, it also serves as a bridge for anyone entering CPS from related areas of computer science or engineering.

Truly complex, engineered systems—known as cyber-physical systems—that integrate physical, software, and network aspects are now on the rise. However, there is no unifying theory nor systematic design methods, techniques or tools for these systems. Individual (mechanical, electrical, network or software) engineering disciplines only offer partial solutions. A technique known as Multi-Paradigm Modelling has recently emerged suggesting to model every part and aspect of a system explicitly, at the most appropriate level(s) of abstraction, using the most appropriate modelling formalism(s), and then weaving the results together to form a representation of the system. If properly applied, it enables, among other global aspects, performance analysis, exhaustive simulation, and verification.

This book is the first systematic attempt to bring together these formalisms for anyone starting in the field of CPS who seeks solid modelling foundations and a comprehensive introduction to the distinct existing techniques that are multi-paradigmatic. Though chiefly intended for master and post-graduate level students in computer science and engineering, it can also be used as a reference text for practitioners.

Paulo Carreira is a senior researcher at INESC-ID and senior lecturer of Software Engineering and Database Systems at the CSE Department of IST, University of Lisbon, Portugal. He has served as a scientist in multiple national, EU-funded, and industry-funded projects that applied big data and real-time sensor data processing to cyber-physical systems in the domains of energy management and building automation. Before joining academia, he worked in the industry for 10 years, and was involved in a number of high-visibility data integration projects, both in technical and managerial roles. Paulo is currently also a senior member of the IEEE and the CSO of Sensei, an AI company that turns cameras into sensors to create fully autonomous retail stores. Paulo was a workgroup leader of the MPM4CPS EU COST Action IC1404.

Vasco Amaral is a senior lecturer at the Department of Computer Science, Universidade Nova de Lisboa, Portugal, and a senior researcher of the NOVALINCS research center. Vasco is also senior member of IEEE. His research is primarily focused on model-driven engineering foundations (mostly domain-specific languages, model composition, model transformations and verification) and multi-paradigm modelling for cyber-physical systems. He has done applied research on high-energy physics computing and is currently involved in the topic of building automation projects. Also, he has been involved in the organization of a series of the international summer school on domain-specific modelling theory and practice (DSM-TP). He was vice-chair of the MPM4CPS EU COST Action IC1404.

Hans Vangheluwe is a Professor at the University of Antwerp. He is the head of the Modelling, Simulation and Design Lab (MSDL) that studies the theory of multi-paradigm modelling and builds tools to support the design and implementation of such complex systems. The MSDL is part of the School of Computer Science of McGill University in Montréal, Québec, Canada and of the AnSyMo (Antwerp Systems). Hans was a co-founder of Modelica, a language for a causal modelling of complex systems and computer automated multi-paradigm modelling. Working in a variety of projects, often with industrial partners, he has developed and applied the model-based theory and techniques of multi-paradigm modelling in such diverse domains as wastewater treatment plant design and optimization, or safe automotive software. He was also the chair of the MPM4CPS EU COST Action IC1404.