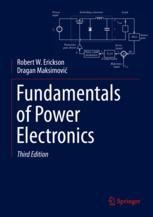 Fundamentals of Power Electronics, Third Edition, is an up-to-date and authoritative text and reference book on power electronics. This new edition retains the original objective and philosophy of focusing on the fundamental principles, models, and technical requirements needed for designing practical power electronic systems while adding a wealth of new material. Improved features of this new edition include: new material on switching loss mechanisms and their modeling; wide bandgap semiconductor devices; a more rigorous treatment of averaging; explanation of the Nyquist stability criterion; incorporation of the Tan and Middlebrook model for current programmed control; a new chapter on digital control of switching converters; major new chapters on advanced techniques of design-oriented analysis including feedback and extra-element theorems; average current control; new material on input filter design; new treatment of averaged switch modeling, simulation, and indirect power; and sampling effects in DCM, CPM, and digital control.

Fundamentals of Power Electronics, Third Edition, is intended for use in introductory power electronics courses and related fields for both senior undergraduates and first-year graduate students interested in converter circuits and electronics, control systems, and magnetic and power systems. It will also be an invaluable reference for professionals working in power electronics, power conversion, and analog and digital electronics.

Robert W. Erickson received the B.S. (1978), M.S. (1980), and Ph.D. (1982) degrees in Electrical Engineering, from the California Institute of Technology, Pasadena, California. Since 1982, he has been a member of the faculty of Electrical, Computer, and Energy Engineering at the University of Colorado, Boulder, where he served as department Chair in 2002-2006, 2014-15, and 2018-2020. He co-directs the Colorado Power Electronics Center. Professor Erickson is a Fellow of the IEEE, a Fellow of the CU/NREL Renewable and Sustainable Energy Institute, and holds the endowed Palmer Leadership Chair. He is the author of approximately one hundred journal and conference papers in the area of power electronics. In 1996, he received the IEEE Power Electronics Society Transactions Prize Paper Award, for the paper "Nonlinear Carrier Control for High-Power-Factor Boost Rectifier." He received the CU-Boulder Inventor of the Year Award in 2015, and the Holland Teaching Excellence Award in 2010. His current research interests include modeling and control of power conversion systems, modular/multilevel converter systems, and power electronics for electric vehicles and renewable energy sources (wind and solar).

Dr. Maksimović  is a Charles V. Schelke Endowed Professor in the Department of Electrical, Computer and Energy Engineering. He co-founded the Colorado Power Electronics Center (CoPEC), and has since served as the CoPEC Co-Director. CoPEC research program in smart power electronics and digital control for high-frequency switched-mode power converters has attracted significant support from numerous industrial sponsors and agencies (NSF, DARPA, ARPA-E, DOE, ONR, DOEd). Prof. Maksimovic is a Fellow of the IEEE. He has published over 300 papers in journals and at professional conferences, and holds over 30 US patents. His current research interests include power electronics for renewable energy sources and energy efficiency, high frequency power conversion using wide bandgap semiconductors, digital control of switched-mode power converters, as well as analog, digital and mixed-signal integrated circuits for power management applications.

“This book … is rigorous and comprehensive, and well worth keeping close at hand for anyone involved in the engineering of power electronics.” (Dennis Feucht, how2power.com, March, 2021)