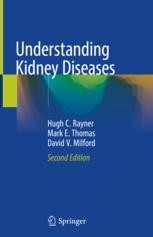 This book combines the reference material of a nephrology textbook with the everyday relevance of a clinical handbook. This second edition develops and expands upon the success of the first. All the content has been updated and entirely new chapters on acid-base disorders and stone disease have been added.

Understanding Kidney Diseases includes over 60 real-life case studies and is illustrated with over 200 figures. Readers can test their knowledge with a bank of multiple-choice questions and put it into practice by answering questions that patients frequently ask. The book provides all that students, residents and fellows need in order to approach a patient with a kidney problem with confidence.

Dr Hugh C. Rayner gained a first-class degree in physiology at Cambridge University before qualifying with honours at the London Hospital Medical College in 1981. He was awarded an MD from the University of Leicester for studies on experimental models of kidney disease. After a number of training posts, including a year as clinical fellow in Melbourne Australia, he was appointed as a consultant in renal and general medicine in Birmingham in 1993, teaching renal medicine to undergraduates and trainee doctors.

As part of his studies for the Diploma in Medical Education from Dundee University in 1996, he presented a dissertation on the interpretation of serum creatinine and published a consensus curriculum for undergraduate renal medicine [1]. He retired from clinical nephrology practice in December 2019.

Dr Mark E. Thomas studied Biological Sciences and Medicine as an undergraduate at Kings College London and Westminster Medical School. After postgraduate training he was a Research Fellow at Washington University Medical School in St Louis, USA for three years, studying models of proteinuric renal disease. This interest continued during Senior Registrar training in Leicester. He has been a Consultant Nephrologist and Physician in Birmingham since 1998.

He has had a clinical research interest in acute kidney injury (AKI) for some years, including earlier detection and intervention in AKI. He is chief investigator for the Acute Kidney Outreach to Reduce Deterioration and Death (AKORDD) study, a large pilot study of AKI outreach. He has chaired clinical guideline development groups for AKI, anaemia management in CKD and End of life care for the UK National Institute for Health and Care Excellence (NICE).

“This book is a resource for those taking care of patients with kidney disease. … I find this text to be an engaging and inviting resource for those seeking to enhance their understanding and clinical skills in nephrology. I would recommend this book for medical students in their clinical rotations, residents, and non-nephrologists.” (Joseph Blake Herald, Doody's Book Reviews, March 19, 2021)