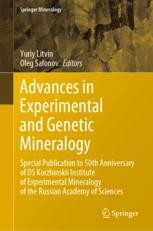 Advances in Experimental and Genetic Mineralogy

This book presents fundamental experimental data and experiment-based theoretical conclusions on, as well as physico-chemical models of, the natural hydrothermal, metasomatic, metamorphic, magmatic and ore-producing processes in the Earth’s crust, upper mantle, transition zone and lower mantle. The topics discussed concern the interactions of oil and aqueous fluids as revealed by aqueous-hydrocarbonic inclusions in synthetic quartz and applied to the natural evolution of oil; determining the solubility and inter-phase partitioning of trace and strategic elements and their components; and experimentally validating physico-chemical mechanisms in the ultrabasic-basic evolution of deep-mantle magmatic and diamond-forming systems. In addition, the book presents experimental studies on the physico-chemical properties of supercritical water and hydrothermal fluids, viscosity of acidic ultramafic magmatic materials melts, peculiarities of metamorphism in basic rocks, kinetics of mineral nucleation in silicate melts and hydrothermal solutions, and influence of complex H2O-CO2-HCl fluids on melting relations in mantle-crust rocks, together with novel results and conclusions. Given its scope, the book will be of great interest to all Earth scientists, lecturers and students specialized in experimental and genetic mineralogy, petrology and geochemistry.

Oleg G. Safonov is Director of the Korzhinskii Institute of Experimental Mineralogy, Russian Academy of Sciences, Russia (since 2017), an Honored Young Professor of the Russian Academy of Science (since 2015), Professor at the Department of Petrology, Geological Faculty of Moscow State University, Russia, and Visiting Professor at the Department of Geology, University of Johannesburg, South Africa. Holding a Ph.D. (1997) and postdoctoral degree (2007) from Moscow State University, Prof. Safonov’s research and teaching focus on various fields of magmatic and metamorphic petrology, experimental petrology, mineralogy and geochemistry, mineral thermodynamics and geothermobarometry. His recent publications in peer-reviewed journals concern the petrology, geochemistry and geodynamics of Precambrian granulite complexes and cratons, fluid-rock-melt interaction during high-grade metamorphism, mantle magmatism and metasomatism. Using original experiments, Prof. Safonov has put forward a thermodynamic model for using potassium-bearing clinopyroxene to monitor potassium activity and pressure in the upper mantle, and has developed models for the evolution of alkaline chloride-bearing carbonate-silicate liquids and their relations to kimberlitic and alkaline magmas. He has also experimentally demonstrated the melting of crustal rocks involving salt-bearing aqueous-carbonic fluids, and the thermal and fluid effects of granite intrusions during granulite metamorphism.

Yuriy A. Litvin D.Sc. (Chemistry and Geochemistry) is a Professor and major scientific researcher at the Mantle Laboratory, Korzhinskii Institute of Experimental Mineralogy (Russian Academy of Sciences). His scientific interests include the physical geochemistry of the Earth’s mantle, genetic mineralogy of diamond and paragenetic inclusions, and experimental study of multicomponent multiphase mantle systems. His principal scientific findings concern the physico-chemical mechanisms of diamond formation in metal-carbon and carbonate-carbon systems; peritectic reactions of orthopyroxene and olivine (upper mantle), ringwoodite (transition zone) and bridgmanite (lower mantle – “stishovite paradox”); the physico-chemical foundations of the ultrabasic-basic evolution of mantle magmas and diamond-parental melts; and the mantle-carbonatite theory of diamond genesis. He is the author of several books: Physico-chemical studies of the Earth’s deep substance melting (1991); Experimental studies of carbonate-silicate systems of the mantle in the context of the problem of diamond formation (2011); Genesis of diamonds and associated phases (2017); and Evolution of magmatic and diamond-forming systems of the Earth’s lower mantle (2019).