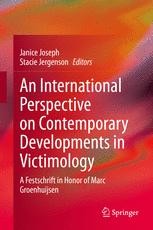 An International Perspective on Contemporary Developments in Victimology

A Festschrift in Honor of Marc Groenhuijsen

This festschrift in honor of the work and legacy of Dr. Marc Groenhuijsen provides an international and holistic overview of recent developments in victimology, taking a global scope but grounded in everyday experiences of victims.  Its multidisciplinary perspective reflects a range of approaches and practices in victimology, including contributions from the fields of social work, criminology, sociology, psychology, and law.

Firstly, the volume introduces new perspectives in victimology, and then analyzes different forms of victimization in countries worldwide.  It gives special attention to victims’ rights and participation in the criminal justice system, detailing victim-centered approaches to justice through practices such as restorative justice and restitution.

Highlighting the growth and development of victimology from a specialization in criminology to an academic discipline in its own right, this book reflects the range of approaches and depth of scholarship in the field. This will be an essential resource to students of victimology, researchers, policy makers, and victim’s advocates.

Janice Joseph is a Distinguished Professor of the Criminal Justice Program at Stockton University and presently the Coordinator of the Victimology and Victim Services Minor Program.  In 2010, she became the 47th President of the Academy of Criminal Justice Sciences (ACJS), a national criminal justice organization, with over 2,000 members.  She has also served as ACJS United Nations NGO representative for over ten years.  She was elected several times as a member of the Executive Board of the International Scientific and Professional Advisory Council (ISPAC) of the United Nations Crime Prevention and Criminal Justice Programme, Milan, Italy and was the Chair of the Working Party on Violence Against Women for that UN Institute.  She is presently one of the Vice Presidents of the World Society of Victimology (WSV) and the Chair of the Standards and Norms for that organization.  She was also Chair of the UN Liaison Committee of WSV.  She is also the Editor of the Journal of Ethnicity in Criminal Justice, a scholarly criminal justice journal.  Her broad research interests include gangs, juvenile delinquency, female victims, and women and criminal justice. She has over 70 publications and made over 150 professional presentations in more than 26 different countries.

Stacie Jergenson is an Assistant Professor at Bemidji State University, where her primary teaching responsibilities have included conceptualization, development and delivery of a Victimology emphasis and all associated courses (theory, practice, forensics, global perspectives, and restorative justice).  She also has 15 years of state court service under the appointment of a district court judge.  She holds a Ph.D. in Criminal Justice and M.S. in Public Safety Executive Leadership, as well as a Certificate in Restorative Justice.  She has served in various capacities, including Program Committee, Chair of Comparative Justice area, and Student Affairs Committee of the Academy of Criminal Justice Sciences (ACJS); elected to Board of Directors and Strategic Planning Committee of the American Association of Electronic Reporters & Transcribers (AAERT); elected Co-Chair of Statewide (Judicial Branch) Labor-Management Committee; and founding member of the Beltrami County Anti-Sex Trafficking Task Force which strives to build community awareness, as well as connections with three local American Indian reservations.  Her research topics include victim services, restorative justice practices, applied victimology, human and sex trafficking, prostitution, murdered and missing indigenous women, epidemiological criminology, homicides, and GIS/spatial analyses.  She regularly travels and lectures internationally.