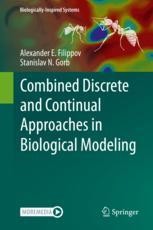 Basic laws of nature are rather simple, but observed biological structures and their dynamic behaviors are unbelievably complicated. This book is devoted to a study of this “strange” relationship by applying mathematical modeling to various structures and phenomena in biology, such as surface patterns, bioadhesion, locomotion, predator-prey behavior, seed dispersal, etc. and revealing a kind of self-organization in these phenomena. In spite of diversity of biological systems considered, two main questions are (1) what does self-organization in biology mean mathematically and (2) how one can apply this knowledge to generate new knowledge about behavior of particular biological system? We believe that this kind of “biomimetics” in computer will lead to better understanding of biological phenomena and possibly towards development of technical implications based on our modeling.

Alexander Filippov is Principal Scientist of Donetsk Institute for Physics and Engineering. He received his PhD degree in solid state physics, phase transitions and critical phenomenon in 1985 and in 1990 was habilitated as Doctor of Science in 1990 in former USSR. He is member of the Scientific Council of Donetsk Institute for Physics and Engineering of National Academy of Sciences of Ukraine. Filippov is known specialist in the fields of theoretical and applied physics. His interest ranges from atomic scale friction and planetary systems dynamis to the questions of biological evolution and ecology. He discovered for the first time so-called physical branch of solution of the exact local renormalization group equation and developed new variant of the perturbation theory based on naturally small Fisher exponent. Filippov performed a number of outstanding studies of critical phenomena in magnetic, traditional and high-temperature superconducting systems. Most these works are published in Nature, PNAS, Phys. Rev. Letters, Scientific Reports and other top journals. Using ideas of dynamic chaos and self-organization in nonlinear systems, Filippov published a number of studies related to the general theory of biological evolution and some applications to the bacterial growth, ecology of seed dispersal, animal behaviour, biomimetics, etc. He also has numerous publications in tribology on mesoscopic fractal and nano-scale surfaces, which are extremely well recognized and widely cited by the scientific community. He was invited by numerous working groups worldwide to theoretically solve specific experimental problems: Universite Pierre et Marie Curie (France), University of Nymegen (the Netherlands), Hong Kong  Baptist University (Hong Kong), Tel Aviv University (Israel), Berlin Technical University (Germany), International School for Advanced Studies (SISSA, Trieste, Italy), University of Kiel (Germany), Université de Montréal (Canada). In 2016, Filippov received the Georg Forster Research Award from Humboldt Foundation, Germany. He is author of the book “Phase Transitions in Systems with Competitive Interactions” (1989) and has around 250 papers in peer-reviewed journals.
Stanislav Gorb is Professor and Director at the Zoological Institute of the Kiel University, Germany. He received his PhD degree in zoology and entomology at the Schmalhausen Institute of Zoology of the Ukrainian Academy of Sciences in Kiev. Gorb was a postdoctoral researcher at the University of Vienna (Austria), a research assistant at University of Jena, a group leader at the Max Planck Institutes for Developmental Biology in Tübingen and for Metals Research in Stuttgart (Germany). Gorb’s research focuses on morphology, structure, biomechanics, physiology, and evolution of surface-related functional systems in animals and plants, as well as the development of biologically inspired technological surfaces and systems. He received the Schlossmann Award in Biology and Materials Science in 1995, International Forum Design Gold Award in 2011, Materialica "Best of" Award in 2011, Karl Ritter von Frisch Medal of German Zoological Society in 2018 and Outstanding Contribution Award of the International Society of Bionic Engineering in 2019. Gorb is Corresponding member of Academy of the Science and Literature Mainz, Germany (since 2010) and Member of the National Academy of Sciences Leopoldina, Germany (since 2011). Gorb has authored and co-authored several books, more than 500 papers in peer-reviewed journals, and four patents.