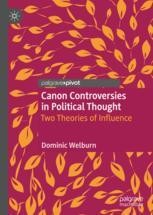 This book explores the meaning of 'influence', which has played a central role in the formation of the canon, or tradition, of Western political thought. Via a critical overview of the relative fortunes of influence studies in the history of political thought, literary theory, and – at times – the history of art and poetry, it is possible to identify a dominant theory of the term. Nietzschean and ‘emanational’ in nature, thanks largely to the work of Harold Bloom, this particular theory views influence as mere power and represents a broadly accepted meaning in twentieth century thought. Canons or traditions of thought came to be institutions in themselves reflecting prevalent social and political inequalities. To be sure, a theory of influence as power came to be seen as complicit in arbitrary canon formation, across a range of disciplines. The book argues, ultimately, that a second theory of influence, imported from Mary Orr’s work on intertextuality, affords a rival perspective and a more positive, intergenerational meaning of influence. Orr’s ‘braided rope’ theory of influence allows for the development of a plurality of canons each capable of constructing new histories for a variety of epistemic communities. The existence of agonistic, rival canons presents pedagogical questions for all teachers of political theory, but one that can be potentially navigated by a new understanding of influence, in the Orrian tradition.

Dominic Welburn taught political theory for ten years at the universities of Hull, Leeds, York, Oxford Brookes, and Birmingham. He is now based at Bradford University, UK.

“In this well-written and critically informed book, Welburn reviews how past political thinkers are connected. He invites us to re-think the question of influence in the history of political thought.” (Gary Browning, Professor of Political Thought, Oxford Brookes University, UK)

“This is an excellent study. It achieves an impressive feat of synthesis of existing writing on the ‘influence problem’ in the history of thought and, in so doing, makes influence speak to very many of the concerns of the present day. By beginning with the linguistic ambiguities of the word ‘influence’ – as verb, as noun – Welburn manages to unlock some persisting puzzles. He concludes by demonstrating that re-thinking influence should matter to politics, as well as method. The human virtues which Welburn finds vital to carrying out inquiry into influence that would be profitable – such as humility, openness, groundedness – are well embodied in his own efforts.” (Richard Shorten, Senior Lecturer in Political Theory, University of Birmingham, UK)

“This is a timely and perceptive account of the positive role of ‘influence’ in political thought. Dominic Welburn engages with a range of studies in literary and philosophical theory to defend canonicity as essential to, rather than the antithesis of, originality. He provides a refreshing defence of the Western tradition, albeit alongside rival canons as expressions of different political imaginations.” (Julia Stapleton, Professor of Political Thought, Durham University, UK)