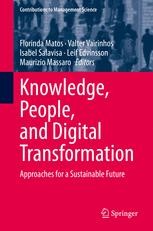 Approaches for a Sustainable Future

Florinda Matos is the founder and president of the ICAA - Intellectual Capital Association. She holds a PhD in Social Sciences and Organizational Behaviour Studies from the University of Lisbon (Portugal). She teaches graduate and post-graduate courses at the ISCTE - Instituto Universitário de Lisboa - and several other higher education institutions. She was a Post-Doc researcher with a focus on the Social Impacts of Additive Manufacturing and is currently an associate research fellow of DINÂMIA'CET-IUL - the Centre for Socioeconomic and Territorial Studies. She is also a member of the New Club of Paris.

Valter Vairinhos is a retired officer in the Portuguese Navy, where he served as a naval engineer from 1964 to 2009. He holds a doctoral degree in Multivariate Data Analysis from the Statistics Department of Salamanca University (Spain). Currently he divides his research activities between the ICAA’s ICLab and Salamanca University.

Isabel Salavisa is an Associate Professor at the ISCTE - Instituto Universitário de Lisboa, Lisbon, Portugal. She holds a PhD in Economics and is currently conducting research at the DINAMIA’CET-IUL, Centre for Socioeconomic and Territorial Studies, of which she is the former Director (2004-2013). She is also a joint coordinator of the Research Group on ‘Innovation and Labour’.

Leif Edvinsson is a Professor Emeritus and pioneering contributor to the theory and practice of Intellectual Capital (IC). He was the world’s first director of IC in 1991 and prototyped the Skandia Future Center as a Lab for Organisational Design in 1996. In 1998, he was the recipient of the Brain Trust (UK) ‘Brain of the Year award. Listed in the global ‘Who’s Who’, he is a former associate member of the Club of Rome. He is a co-founder and founding Chairman of the New Club of Paris.  In 2013, he was the recipient of the ‘Thought Leader Award’ bestowed by the European Commission, Intel, and Peter Drucker Association. In 2015, he was appointed to the Advisory Board of the Japan Innovation Network (JIN), and in 2016, to the Advisory Board of the Norway Open Innovation Forum. In 2017, he was the recipient of the ‘KM Award 2017’ bestowed by Knowledge Management Associates and the United Nations.

Maurizio Massaro is an Associate Professor at Ca’ Foscari University of Venice (Italy). He has also served as a Vice President of the research center on metal analysis. He received the ‘Emerald Literati Award’ for excellent research in the Journal of Knowledge Management.  He is an international member of the Global MIKE Award, and MIKE Award representative for Italy.