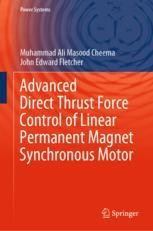 This book explores the direct thrust force control (DTFC) of tubular surface-mount linear permanent magnet synchronous motors (linear PMSMs). It presents a detailed account and analysis of several advanced nonlinear control schemes, based on the direct thrust control principle, to achieve a reduction in steady-state ripple in thrust force with faster transient response, and describes their experimental validation. It also provides rigorous details of the dynamic modelling of linear PMSMs from a control system perspective, and demonstrates the superior control performance of the proposed techniques compared to the current state-of-the-art techniques. Lastly, the book proposes and validates a stator flux observer for sensorless speed estimation comprising a linear state observer and an improved sliding mode component.

Dr. Muhammad Ali Masood Cheema (M’ 16) received B. Sc. (first-class Honours) with gold medal and M.Sc. degrees in Electrical Engineering from the University of Engineering & Technology, Lahore, Pakistan, in 2008 and 2012, respectively. He was awarded a Ph.D. degree in Electrical Engineering by the University of New South Wales, Australia, in 2016. He is Head of Research and Special Design at Northern Transformer Inc, Canada. He is currently an Adjunct Lecturer in the Energy Systems research group at UNSW, Australia, where he is contributing towards the development of advanced nonlinear control schemes for multiphase permanent magnet machines, advanced electric machine design and medium voltage power electronics. He is also a Senior Industrial and Visiting Research Fellow at the Advanced Power Electronics Laboratory for Sustainable Energy Research at York University, Canada. He was awarded a postdoctoral writing fellowship by the University of New South Wales in recognition of his outstanding Ph.D. research focused on direct thrust force control of linear permanent magnet synchronous motors. His research interests include medium voltage power electronics, electrical drives, energy conversion, nonlinear control, convex optimization of electric machine design, and dielectric design of high-voltage power transformers.

Prof. John Edward Fletcher (M’11–SM’13) received B.Eng. (with first-class Honours) and Ph.D. degrees in Electrical and Electronic Engineering from Heriot-Watt University, Edinburgh, UK, in 1991 and 1995, respectively, and he was a lecturer there until 2007. From 2007 to 2010, he was a Senior Lecturer at the University of Strathclyde, Glasgow, UK, and he is currently a Professor at the University of New South Wales, Australia. His research interests include distributed and renewable integration, silicon carbide electronics, pulsed-power applications of power electronics and the design and control of electrical machines. He is a Charted Engineer in the UK and a fellow of the Institution of Engineering and Technology. He has consulted for many global industrial companies in the UK, USA, China, Europe and Japan.