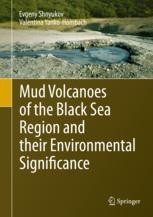 Mud Volcanoes of the Black Sea Region and their Environmental Significance

This exceptionally well-illustrated book at a high scientific level describes mud volcanism as a complex, multidimensional phenomenon requiring multidisciplinary study. Mud volcanoes can be used as “cheap windows” to search for gas-hydrates and other mineral resources in the Black Sea region. Nothing similar has been published before, and as one of its unique features the book includes a vast amount of new data unavailable so far to the western reader. The book includes new data on driving forces, mechanisms, origin, geological and geomorphological features of mud volcanoes as well as new data on composition of solid, gaseous, and liquid components of erupted material. It covers a wide geographic region, and its subjects range from geological to environmental to industrial applications.

Evgeny Shnyukov is an eminent Ukrainian scientist in geology, geochemistry, lithology, sedimentary ore-formation, marine geology, and minerals of the World Ocean. He is Academician of the National Academy of Sciences of Ukraine (NASU), Doctor of Geological-Mineralogical Sciences, Professor, Member of the International Academy of Sciences of Eurasia, Honorary Director of the Center for Problems of Marine Geology, Geoecology and Sedimentary Ore Formation of the NASU (former Department of Marine Geology and Sedimentary Ore-Formation of NASU), and Head of the Ukrainian Lithology Committee.  He has received many awards, including the State Award of Ukraine in Science and Technology, two State Prize of Ukraine for a series of works devoted to the World Ocean, gold medal “Leonardo da Vinci” of the International Academy of Sciences of Eurasia among many others. He has authored, coauthored, and edited over 700 scientific publications, including 50 books, and supervised over 30 PhD students. As the first scientist to recognize the need for marine geological research in Ukraine, he established the School of Marine Geology and Sedimentary Ore-Formation, and initiated a new stage in the study of sedimentary iron and manganese ores, geology of the Black and Azov Seas, as well as comprehensive geological–geophysical and metallogenic investigations of the World Ocean’s bottom sediments. He embraces a wide range of geological problems and represents a striking example of the fruitful union of science and practice. He supervised and actively participated in building of the Research Vessel “Geochimik” and headed a series of geological–geophysical expeditions on it and other research vessels. Materials from these expeditions led to the discovery of a submarine massif of crystalline rocks (Lomonosov Ridge), tens of mud volcanoes, and hundreds of gas seeps suggesting the presence of oil and gas beneath the Black Sea. Some of his books, such as The World of Minerals and Catastrophes in the Black Sea as well as many others have gained wide recognition and are already bibliographic rarities.

Valentina Yanko-Hombach is the world leading scientist in field of marine geology and micropaleontology (foraminifera). She is Doctor of Geological-Mineralogical Sciences, Professor, Head of the Department of Physical and Marine Geology of Odessa I.I.Mechnikov National University, Head of the Scientific and Educational Center of Geoarchaeology, Marine and Environmental Geology, Odessa I.I. Mechnikov National University, Ukraine, President of the Avalon Institute of Applied Sciences, Winnipeg, Canada. She was a founder and past-president of the International Society of Environmental Micropalaeontology, Microbiology and Meiobenthology, and she has been president/executive director/plenary speaker at numerous international conferences, head of numerous international projects and research cruises, and chairman of special sessions and symposia at IGU, EGU, GSA, INQUA congresses and other international fora. She has received many awards including Certificate and Medal of the All-Ukrainian Union of Geologists, award of Excellence from Universities of  Palermo and Isparta, award of Excellence for Sustainable Development, Manitoba, Canada, and some others. In 1990 she initiated a multidisciplinary program in Environmental Micropalaeontology, through which she carried out pioneering research in both field and experimentally in the "Application of microorganisms to environmental change." The geographical area of her investigations covers the southern European Seas(Mediterranean Sea, Sea of Marmara, Black Sea, Sea of Azov, Caspian Sea, and Aral Sea) from the Quaternary to the present. She is author/coauthor of more that 350 scientific papers including eleven monographs. Fluent in several languages and working easily in both East and West, she is devoting her energies to bringing together internationally recognized experts on environmental micropalaeontology and the geological and archaeological history of the Black Sea and adjacent basins to integrate sedimentological, paleontological, and archaeological data, synthesise a vast amount of non-English literature, and bridge perceived and actual barriers between eastern and western researchers.