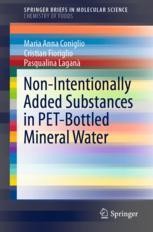 This book discusses a major issue in the food contact materials industry: non-intentionally added substances (NIAS), and their impact on PET-bottled water. NIAS are chemical compounds that are present in food contact materials but have not been added for technical reasons during the production process, and consumers are usually unaware of their presence. NIAS can include decomposition or degradation products, impurities in the raw materials, unwanted by-products or contaminants from recycling processes, and they pose a challenge for packaging manufacturers.
In Europe, the EU Regulations No. 1935/2004 and 10/2011 set out, respectively, the general principles of safety and inertness for all packaging materials, and rules on the composition of plastic food-contact materials. Among the plastics commonly used for bottled water and other non-alcoholic refreshment beverages, polyethylene terephthalate (PET) is the most favoured thanks to its chemical and physical stability, its transparency, low weight and good recyclability. Further, very few additives are used for its manufacture. Nonetheless, due to the complex formulations of polymers, processes and storage, NIAS can also be found in PET-bottled water, with potential cancerogenic or toxic effects.
This book provides an overview of the European regulation of NIAS in plastic packaging materials, offering insights into their chemical composition in PET-bottled water. Lastly, it provides a useful discussion on NIAS and their toxicity.

Maria Anna Coniglio is a Medical Doctor who graduated from the University of Catania in 1998 and specialized in Hygiene and Preventive Medicine at the same university in 2002, where she also began her research activities in the fields of health promotion and epidemiology of infectious and non-infectious diseases. She has been an Aggregate Professor at the University of Catania since 2005; a member of the Sicilian Commission for the Application of Legionella Guidelines since 2011; and Director of the Regional Reference Laboratory for Clinical and Environmental Legionella Surveillance (Catania branch) since 2012. In collaboration with the Local Health Unit she has organized several training courses on health promotion. She has published several papers in national and international journals on health promotion, epidemiology and the prevention of infectious and non-infectious diseases.

Cristian Fioriglio is a Biologist who graduated from the University of Catania in 2008 and holds specialist degrees in Agricultural Biotechnology and Food Science and Technology. Dr. Fioriglio works as a policeman at the Catania Police Headquarters, and also serves as a technical consultant, forensic biologist and forensic toxicologist for the judiciary. In 2016 he invented and patented the BioTappo, a smart packaging solution to safeguard the health of consumers who buy beverages packaged in PET bottles (International Publication Number: WO 2018/020522 A1). He is also a lecturer in Hygiene and Health Education at the University of Catania and has several scientific publications to his credit.

Pasqualina Laganà is a Biologist with an MSc from the University of Messina, Italy, and specializations in General Pathology (1992) and Chemistry and Food Technologies (2000). She also holds a Master in ‘Epidemiology and Biostatistics’ (Università Cattolica del Sacro Cuore, Rome, Italy, 2013). Since 1996 she has been an Adjunct Professor of General and Applied Hygiene, and a Researcher at the Faculty of Medicine and Surgery at the University of Messina. A member of the Italian Society of Hygiene, Preventive Medicine and Public Health (S.It.I.); and of the Sicilian Commission for the Application of Legionella Guidelines since 2011; she has also served at the Regional Reference Laboratory for Clinical and Environmental Legionella Surveillance (Messina branch) since 2012, and as Head of the Laboratory since 2016. She serves on the Editorial Boards of several journals, including the Journal of Clinical Microbiology and Biochemical Technology (JCMBT), Zeszyty Naukowe (Gdynia Maritime University, Poland), Global Drugs and Therapeutics (GDT) and EC Microbiology (ECMI). She is also a reviewer for various international scientific journals and the author of 80 publications indexed in Medline and other databases.