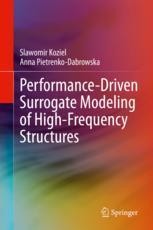 This book discusses surrogate modeling of high-frequency structures including antenna and microwave components. The focus is on constrained or performance-driven surrogates. The presented techniques aim at addressing the limitations of conventional modeling methods, pertinent to the issues of dimensionality and parameter ranges that need to be covered by the surrogate to ensure its design utility. Within performance-driven methodologies, mitigation of these problems is achieved through appropriate confinement of the model domain, focused on the regions promising from the point of view of the relevant design objectives. This enables the construction of reliable surrogates at a fraction of cost required by conventional methods, and to accomplish the modeling tasks where other techniques routinely fail. The book provides a broad selection of specific frameworks, extensively illustrated using examples of real-world microwave and antenna structures along with numerous design examples. Furthermore, the book contains introductory material on data-driven and physics-based surrogates. The book will be useful for the readers working in the area of high-frequency electronics, including microwave engineering, antenna design, microwave photonics, magnetism, especially those that utilize electromagnetic (EM) simulation models in their daily routines.

Slawomir Koziel received the M.Sc. and Ph.D. degrees in electronic engineering from Gdansk University of Technology, Poland, in 1995 and 2000, respectively. He also received the M.Sc. degrees in theoretical physics and in mathematics, in 2000 and 2002, respectively, as well as the PhD in mathematics in 2003, from the University of Gdansk, Poland. He is currently a Professor with the School of Science and Engineering, Reykjavik University, Iceland. His research interests include CAD and modeling of microwave circuits, simulation-driven design, surrogate-based optimization, space mapping, circuit theory, evolutionary computation and numerical analysis. In recent years, he has been working extensively on surrogate-based modeling and optimization techniques as well as computationally efficient simulation-driven design methods for microwave engineering and aerospace engineering. He has published several book chapters and over 800 research papers. He is a founder and director of Engineering Optimization & Modeling Center at Reykjavik University.
Slawomir Koziel is a recipient of Fulbright Scholarship for the academic year 2003/2004. He has served on the Editorial Board of various international journals, program committee member as well as co-organizer of numerous special sessions and workshops at international conferences. He is an Associate Editor of several journals (IET Microwaves Ant. Prop., El. Lett., Int. J. Math. Modeling Num. Opt., Int. J. Numerical Modeling). He has also been a guest co-editor of several special issues of international journals (including Optimization and Engineering, Int. J. RF and Microwave CAE, Int. J. Math. Modelling and Num. Opt, IEEE Trans. Microwave Theory Techn.), as well as a co-author of several books, including „Simulation-based optimization of antenna arrays,” (World Scientific, 2019),  “Simulation-driven design by knowledge-based response correction techniques” (Springer, 2016), and “Antenna design by simulation-driven optimization” (Springer, 2014), and a co-editor of several other books.
Anna Pietrenko-Dabrowska received the M.Sc. and Ph.D. degrees in electronic engineering from Gdansk University of Technology, Poland, in 1998 and 2007, respectively. Currently, she is an Associate Professor with Gdansk University of Technology, Poland. She is the Associate Editor of Int. J. Numerical Modeling, and Academic Editor of Int. J. Ant. Prop. She is also a guest co-editor of special issue of Int. J. Numerical Modeling (Advances in Forward and Inverse Surrogate Modeling for High-Frequency Design). She is a program committee member of international conferences (IEEE MTT-s Int. Conf. Num. EM and Multiphysics Modeling and Optim., NEMO 2019, Int. Conf. Comp. Science, ICCS 2019). Her research interests include simulation-driven design, design optimization, experiment design, control theory, modeling of microwave and antenna structures, numerical analysis.