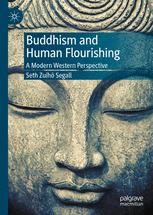 The Buddha and Aristotle offer competing visions of the best possible life to which human beings can aspire. In this volume, Seth Zuihō Segall compares Theravāda and Mahāyāna accounts of enlightenment with Aristotelian and neo-Aristotelian accounts of eudaimonia, and proposes a syncretic model of eudaimonic enlightenment that, given prevalent Western beliefs about well-being and human flourishing, provides a credible new end-goal for modern Western Buddhist practice. He then demonstrates how this proposed synthesis is already deeply reflected in contemporary Western Buddhist rhetoric. Segall re-evaluates traditional Buddhist teachings on desire, attachment, aversion, nirvāṇa, and selfhood from the eudaimonic enlightenment perspective, and explores the perspective’s ethical and metaphysical implications.

Seth Zuihō Segall is a Zen Buddhist priest and clinical psychologist who served for nearly three decades on the clinical faculty of Yale University School of Medicine. He is currently the science writer for the Mindfulness Research Monthly and a chaplain associate at White Plains Hospital.

“Buddhism and Human Flourishing is an admirably thoughtful work of comparative practical philosophy and psychology. It is one of the few books from a modern Buddhist perspective that grapples with the realities of historical and cultural context and with what it means to take up ideas and practices from a very different time and place with nuance and complexity. A rare fusion of erudition and accessibility, it will be of interest to scholars and practitioners alike.” (David L. McMahan, Ph.D., Charles A. Dana Professor of Religious Studies, Franklin & Marshall College; Author of The Making of Buddhist Modernism (Oxford University Press, 2008))
“Contemporary Western Buddhism has become a process, not of the extinction of the self and desire, but of their transformation in the service of human flourishing. Seth Zuihō Segall, with a creative synthesis of contemporary psychology and Aristotelean virtue ethics, has formulated a new “eudaemonic Buddhism” that is both relevant to our times, while preserving the essential teachings of traditional Buddhism.” (Barry Magid, M.D. Psychoanalyst and Founding Teacher, Ordinary Mind Zendo. Author of Ordinary Mind: Exploring the Common Ground of Zen and Psychoanalysis (Boston: Wisdom, 2002); Ending the Pursuit of Happiness: A Zen Guide (Boston: Wisdom, 2008); and Nothing is Hidden: The Psychology of Zen Koans (Boston: Wisdom, 2013))
“While the influence of Buddhism has made its way from the east to the west most people have a very superficial understanding and appreciation of the rich Buddhist tradition and are often challenged by integrating Buddhist concepts, insights, and wisdom into contemporary life in the western world. Dr. Seth Zuiho Segall offers a much needed remedy for this problem in his new book, Buddhism and Human Flourishing: A Modern Western Perspective. As both a clinical psychologist and a Zen Buddhist priest he provides a thoughtful and unique perspective written in a scholarly yet very engaging and approachable style. Certainly anyone who is interested in the Buddhist tradition and contemporary society will want to read this book and will be grateful that they did.” (Thomas G. Plante, Ph.D., ABPP, Augustin Cardinal Bea, S.J. University Professor and Professor of Psychology, Santa Clara University and Adjunct Clinical Professor of Psychiatry, Stanford University)
“Challenging traditional understandings of rebirth and karma is a hallmark of all emerging modernist Buddhisms. If they’re right, then one question burns: what is enlightenment? Seth Zuihō Segall, Zen priest and psychologist, explores how Aristotle’s eudaimonia may prove the key to a modernist Buddhist path of awakening. This is a compelling book, challenging but also inviting. It's an important contribution to a growing modernist Buddhist literature. I recommend it to anyone wrestling with the great questions of who are we and how can we live lives of value and meaning.” (James Ishmael Ford, Roshi; Author of Introduction to Zen Koans: Learning the Language of Dragons and If You're Lucky, Your Heart Will Break: Field Notes from a Zen Life)
“Seth Zuihō Segall is one of a kind: a Zen Buddhist priest, a hospital chaplain associate, psychotherapist, existentialist, peace activist, and as fluent in recent philosophical debates about the nature of self and consciousness as in the history and philosophy of Buddhism. In this timely, crystal clear book, Segall defends a version of Buddhism modernism attuned to the sensibilities of secular and scientifically minded people. How can people in the lineage of Plato and Aristotle and the Abrahamic traditions adapt and adopt Buddhist beliefs and sensibilities? In this terrific book, Seth Segall shows a way.” (Owen Flanagan, Ph.D., James B. Duke Professor of Philosophy, Duke University; Author of The Bodhisattva’s Brain)