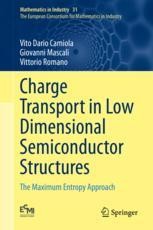 This book offers, from both a theoretical and a computational perspective, an analysis of macroscopic mathematical models for description of charge transport in electronic devices, in particular in the presence of confining effects, such as in the double gate MOSFET. The models are derived from the semiclassical Boltzmann equation by means of the moment method and are closed by resorting to the maximum entropy principle. In the case of confinement, electrons are treated as waves in the confining direction by solving a one-dimensional Schrödinger equation obtaining subbands, while the longitudinal transport of subband electrons is described semiclassically. Limiting energy-transport and drift-diffusion models are also obtained by using suitable scaling procedures. An entire chapter in the book is dedicated to a promising new material like graphene. The models appear to be sound and sufficiently accurate for systematic use in computer-aided design simulators for complex electron devices. The book is addressed to applied mathematicians, physicists, and electronic engineers. It is written for graduate or PhD readers but the opening chapter contains a modicum of semiconductor physics, making it self-consistent and useful also for undergraduate students.

Vittorio Romano graduated in Mathematics in 1989 and obtained his PhD in Mathematics in 1994 at the University of Catania, Italy. He was Assistant Professor at the Polytechnic of Bari from 1996 to 2001, when he joined the University of Catania as Associate Professor. Since 2011 he has been Full Professor in Mathematical Physics. At present he is head of the Interdepartmental Centre of Mathematics for Technology A. M. Anile and a member of the Scientific Committee of the Italian National Group of Mathematical Physics and the Program Committee of the SCEE (Scientific Computing in Electrical Engineering) conferences. He has been local coordinator of the node of the University of Catania for the projects EU-RTN “COMSON” and ENIAC JU “ERG”, director of the international schools MOMINE08 (Modeling and optimization in micro- and nano-electronics, Baia Samuele, Italy, June 2008) and MOMINE09 (Cetraro, Italy, September 2009), chair of the ICCT 2015 (International Conference on Transport Theory, Taormina, September 2015), and SCEE 2018 (Taormina, September 2018). His main current research interests include mathematical modeling and simulation of charge and phonon transport in semiconductors and low-dimensional structures, and he is the author of more than 100 papers, book chapters, and contributions in volumes and proceedings on these subjects.

Giovanni Mascali received his Master’s degree in Theoretical Physics from the University of Catania in 1994, and his PhD in Mathematics at the Catania-Messina-Palermo consortium of universities in 2000. In 2002 he joined the University of Calabria as Assistant Professor. He is now Professor of Mathematical Physics at the Department of Mathematics and Computer Science of the University of Calabria. He was one of the editors of the 9th volume of Scientific Computing in Electrical Engineering, Series: Mathematics in Industry, and one of the directors of the international school MOMINE09 (Modeling and optimization in micro- and nano-electronics, Cetraro, Italy, September 2009). His research interests focus on extended thermodynamics, radiative fluid dynamics, and mathematical modeling of heat and charge transport in semiconductors and low-dimensional structures. He has published more than 60 papers in international journals, books, and conference proceedings.

Vito Dario Camiola received his Master’s degree in Theoretical Physics and his PhD in Applied Mathematics from the University of Catania. He then worked as a postdoctoral researcher at the Nanoscience Institute of CNR and Scuola Normale Superiore di Pisa. At present, he is a postdoctoral researcher and temporary professor of Analytical Mechanics at Università Politecnica delle Marche. His main research fields are theory of electron transport in low-dimensional devices and quantum thermodynamics.