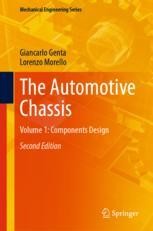 This textbook draws on the authors’ experience gained by teaching courses for engineering students on e.g. vehicle mechanics, vehicle system design, and chassis design; and on their practical experience as engineering designers for vehicle and chassis components at a major automotive company.
The book is primarily intended for students of automotive engineering, but also for all technicians and designers working in this field. Other enthusiastic engineers will also find it to be a useful technical guide.
The present volume (The Automotive Chassis – Volume 1: Component Design) focuses on automotive chassis components, such as:• the structure, which is usually a ladder framework and supports all the remaining components of the vehicle;• the suspension for the mechanical linkage of the wheels;• the wheels and tires;• the steering system;• the brake system; and• the transmission system, used to apply engine torque to the driving wheels.
This thoroughly revised and updated second edition presents recent developments, particularly in brake, steering, suspension and transmission subsystems. Special emphasis is given to modern control systems and control strategies.