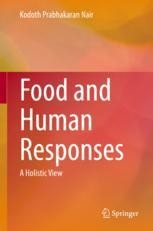 This book discusses the role of food and the human nutrition-behavior interface.  Food makes us what we are, but in addition to providing adequate nutrition, does it influence behavior? This book looks at this critical question from various angles and considers different concepts and approaches to food, nutrition and well-being. To better understand the entire gamut of the food-behavior linkage, the author unravels the workings of the mind - brain link. The book discusses this aspect and the findings add to the existing fund of knowledge in this area. Much of today’s malaise in humans can be traced to the food consumed by individuals. This book provides a comprehensive picture of the current state of human nutrition and how this can be linked to behavior.

Professor Nair was appointed to the National Chair of the Science Foundation, The Royal Society, Belgium, and, affiliated to the State University of Ghent.  Subsequently worked as Professor & Head, Departments of Agriculture, Soil Sciences and Basic Sciences at the University Center, Dschang, The Republic of Cameroon, Senior Professor at the University of Fort Hare, Alice, The Republic of South Africa. Currently Chief Scientific Advisor, The Proletarian Foundation of India. Recipient of The Robertson Memorial Gold medal for outstanding work in Agronomy and many other national and international awards.

Professor Nair has authored more than 100 peer reviewed research papers published in prestigious international journals, nine books (three published by Elsevier) of which one “Issues in National and International Agriculture” was launched by India’s great President late Dr A.P.J.Abdul Kalam. The only agricultural scientist in the world to have been invited six times to contribute invitational chapters to Advances in Agronomy, the magnum opus of agricultural science. Professor Nair’s  ”The Nutrient Buffer Power Concept” project was shortlisted for the very prestigious U.S. $ 1 Million Rolex Awards For Enterprise 2012 of The Rolex Foundation, Geneva, Switzerland, for its originality from more than 3500 nominations worldwide, and is the only project selected for this coveted distinction from the Asian continent.