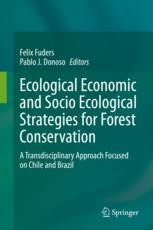 A Transdisciplinary Approach Focused on Chile and Brazil

This book proposes strategies for improving the resilience and conservation of temperate forests in South America, such that these forests can provide ecosystem services in a sustainable way. As such it contributes to the design of a resilient human-forest model that takes into account the multiculturalism of local communities, in many cases including aspects of ecological economics, development economics and territorial development planning that are related to indigenous peoples or first nations. Further, it provides proposals for public and territorial policies that improve the state of conservation of native forests and forest ecosystems, based on a critical analysis of the economic factors that lead to the degradation of forest ecosystems in South America today.

This edition was conceived by members of the Transdisciplinary Research Center for Social and Ecological Strategies for Sustainable Forest Management in South America at the Universidad Austral de Chile. It includes contributions by distinguished researchers from around the world, combining the fields of economics, ecology, biology, anthropology, sociology and statistics. It is not, however, simply a collection of works written by authors from different disciplines, but rather each chapter is in itself transdisciplinary. This approach makes the book a unique contribution to enhancing social, managerial and political approaches to forestry management, helping to protect forest ecosystem services and make them more sustainable. This, in turn, will benefit local communities and society as a whole, by reducing the negative externalities of forestry management and enhancing future opportunities.

Felix Fuders holds undergraduate degrees in Economics and Finance, has a M.A. in International Business Administration and a Ph.D. in Economics and Social Sciences (both University of Erlangen-Nuremberg, Germany). As Professor and researcher at the Universidad Austral de Chile, he currently serves as Director of the Economics Institute as well as Director of SPRING Latin America, an M.Sc. program in Development Planning for Growing Economies jointly offered with universities in the Philippines, Ghana, Tanzania and Germany. He is also Director of the Economic Policy chapter of the Transdisciplinary Research Center for Socio Ecological Strategies for Forest Conservation (TESES). He has been a Visiting Professor at the University of Erlangen-Nuremberg, Germany and the University of Applied Sciences Münster, Germany and a researcher at the RLC Campus Bonn, Germany. Felix Fuders is author and co-author of publications regarding Regional Economic Integration (EU and MERCOSUR), Regulatory Economics as well as Ecological Economics and Monetary Policy. Co-author of the book “La Evolución Sostenible II – Apuntes para una salida razonable”, which was developed in cooperation with researchers from Universidad Mondragón (Spain) and Manfred Max-Neef (Right Livelihood Award 1983). His main research focuses on studying economic as well as moral-ethic problems inherent in our financial system that he believes to be the most relevant but least recognized reason for market failure. In this context, he currently works on explaining why the privatization of natural resources is neither a sustainable nor an allocative efficient solution to what Hardin once called the ‘Tragedy of the Commons’, and why we should distinguish between man-made products and pure natural resources concerning the assignation of property rights. He further advocates a model of an economy in which the driver to achieve allocative efficiency is neighborly love instead of competition. Felix is the Chairman of the Foundation Natural Economic Order, Frankfurt, and a member of the Association for Sustainability, Berlin and the Network Sustainable Economics, Berlin. He has published with internationally respected publishing houses such as Palgrave MacMillan, Springer, HART Publishing and Duncker & Humblot, and is a regular speaker at national and international congresses and scientific meetings.

Pablo Donoso is a Forestry engineer of Universidad Austral de Chile, M.Sc. and Ph.D. in Forest Resources Management (both at the State University of New York, College of Environmental Science and Forestry). Professor and researcher at the Department of Forests and Society, School of Forest Sciences and Natural Resources, Universidad Austral de Chile (UACh), Valdivia, Chile. He served as vice-dean, Faculty of Forest Sciences, 2007-2010 and as Director of the Department of Silviculture, 2011-2012. Currently he is the Director of the Transdisciplinary Research Center of Socio Ecological Strategies for Forest Conservation (TESES) at Universidad Austral de Chile. His main research areas are forest dynamics and silviculture, especially of native forests, but he has also dealt with issues related to forest policies in Chile. His publication record includes 65 articles in WOS as well as four edited books and 26 book chapters, many of which are the result of numerous competitive funded research projects as well as cooperation with peers and graduate students. Pablo has served as the major professor of nearly 10 graduate students. The main goal of this research has been to establish first the ecological foundations for management of mostly mixed forests, and then to evaluate results of the implementation of silviculture in diverse types of native forests, including plantations of native species. He is a strong believer that mostly long-term silvicultural experiments will provide strong information to support sustainable forest management (SFM), and in that direction in most of his research project he has established permanent plots, with more than 100 of these throughout south-central Chile, many of them in the Llancahue reserve (1,300 ha) near the city of Valdivia. However, Pablo is aware that SFM will eventually result from good governance of social-ecological systems, and for that reason TESES and some NGOs are considered by him important to advance in that direction.