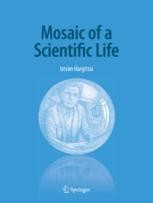 Mosaic of a Scientific Life

In this book, István Hargittai, an internationally renowned physical chemist, narrates his life by introducing over forty personalities that played noteworthy roles in his career. The time span ranges from the Holocaust, which the author survived, through the periods of hard and softer dictatorships of Soviet-type socialism, and the current revival of an autocratic regime in Hungary. He overcame barriers to get a high school, then a university education. He received excellent training in Moscow and was active at Hungarian, American and other international scientific venues, and he has interacted with more Nobel laureates than anyone in the world.

“On the basis of Hargittai’s mosaic of his personal and scientific life, I could compose two further patterns. One would be the history of the twentieth century and the other the science history of the same time period.”