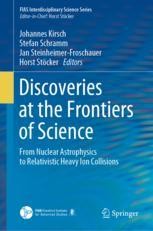 Discoveries at the Frontiers of Science

With contributions by leading theoreticians, this book presents the discoveries of hitherto hidden connections between seemingly unrelated fields of fundamental physics. The topics range from cosmology and astrophysics to nuclear-, particle- and heavy-ion science. A current example concerns the sensitivity of gravitational wave spectra to the phase structure of dense nuclear and quark matter in binary neutron star collisions. The contributions by Hanauske and Stoecker as well as Banik and Bandyopadhyay relate the consequent insights to hot dense nuclear matter created in supernova explosions and in high-energy heavy-ion collisions. Studies of the equation of state for neutron stars are also presented, as are those for nuclear matter in high-energy heavy-ion collisions. Other reviews focus on QCD-thermodynamics, charmed mesons in the quark-gluon plasma, nuclear theory, extensions to the standard general theory of relativity, new experimental developments in heavy ion collisions and renewable energy networks. The book will appeal to advanced students and researchers seeking a broad view of current challenges in theoretical physics and their interconnections.

Johannes Kirsch studied physics, mathematics, and economics at the Goethe Universität in Frankfurt. He graduated with diplomas in physics and business administration and completed his PhD thesis at the Institut für Theoretische Physik in Frankfurt supervised by Walter Greiner. After a career in industry where he was responsible for hardware and software development in a large German industrial company he went to the Frankfurt Institute for Advanced Studies (FIAS) now working on the theory of gravitation and related cosmological topics.

Stefan Schramm studied physics at Goethe Universitaet, where he earned his PhD at Walter Greiners group on strong fields. He went as a postdoc to GSI and Caltech and then as a staff scientist to Argonne National Lab, Chicago. He came to Frankfurt as founding director of the center for scientific computing at Goethe Universitaet and professor for theoretical nuclear- and astrophysics, with a sizable impact in theory of green power networks and artificial intelligence.

Jan Steinheimer-Froschauer graduated in 2008 with a diploma in physics from Goethe Universität Frankfurt where, after three more years, he did his PhD with Stefan Schramm and Horst Stöcker at the Institute for Theoretical Physics. After a year as a Feodor-Lynen Fellow of the Humboldt Foundation at the Lawrence Berkeley National Laboratory, Berkeley, USA he moved back to FIAS where he was appointed a Research Fellow in 2017.

Horst Stöcker studied physics and chemistry at the Goethe Universität,  where he gained his diploma with Werner Scheid and his PhD with Walter Greiner. He did his postdoc years at GSI and LbL, UC Berkeley and became assistant professor at Michigan State University. As of 1985 he became a professor for theoretical physics at Goethe Universität, where he was three times elected vicepresident, before he took of the scientific directorate at the GSI Helmholtz Center for heavy ion research, where he was a co-founder of the international facility for antiproton and ion research fair. With Walter Greiner, Wolf Singer, and Rolf Steinberg he was one of the founders and first CEO of the interdisciplinary Frankfurt Institute for Advanced Studies (FIAS), where he is now member of the board.