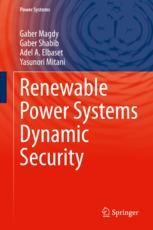 This book presents innovative techniques and approaches to maintaining dynamic security of modern power systems that have a high penetration of renewable energy sources (RESs). The authors propose a number of frequency control strategies and schemes to address and evade stability problems in system frequency and voltage that can lead to power interruption and power failure/blackout. The book includes case studies aimed at validating the effectiveness of the techniques and strategies presented, and will be a valuable resource for researchers working in electrical power engineering, power system stability, dynamics and control, and microgrids.

G. Shabib, PhD, received the BSc degree in electrical engineering from Al-Azhar University, the MSc degree in electrical engineering from the King Fahad University of Petroleum and Minerals, and the PhD degree from Menoufia University, Egypt. In 1982, he joined the Electrical Engineering Department, King Fahad University of Petroleum and Minerals, Dhahran, Saudi Arabia, as a Research Assistant. In 1987, he joined the Qassim Royal Institute, Qassim, Saudi Arabia, as a Lecturer. He joined Aswan High Institute of Energy, South Valley University, Aswan, Egypt, in 1999. He joined the Digital Control Laboratory, Tsukuba University, Japan, as a Visiting Professor, from 2006 to 2007. His research interests include power system stability, control, self-tuning control, fuzzy logic techniques, digital control techniques, all as applied to power systems.
Adel A. Elbaset, PhD, is an associate professor in power electronics at Minia University, where he is also executive manager of the Advanced Lab for Electric Power Systems. He received his BS, MSc, and PhD from Minia University. His research interests are in the areas of renewable energy sources, power electronics, power system protection and control, power quality and harmonics, neural network, and fuzzy systems. Dr. Adel has published five international books.
Yasunori Mitani, DEng, is a professor in the department of electrical and electronics engineering and director of Industry-Academic Collaboration Division, Kyushu Institute of Technology (KIT), Japan. He received his BS, MSc, and DEng degrees in electrical engineering from Osaka University, Japan. From 1994 to 1995, he was a visiting research associate at the University of California, Berkeley. He was the President of the Institute of Electrical Engineers of Japan's (IEEJ) Power and Energy Society from 2016 to 2018. His research interests are in the areas of power system stability, dynamics and control. He has authored numerous books and book chapters, and over 250 journal/conference papers.
Show all