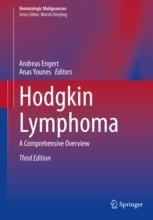 This book, now in its third edition, examines the current treatment options for first-line, relapsed, and refractory Hodgkin lymphoma and the appropriate management in special clinical circumstances, including in the elderly, pregnant women, and those with nodular lymphocyte-predominant disease (NLPHL). Careful attention is devoted to the emerging individually tailored treatment strategies, including checkpoint inhibition, that are especially appealing given their potential to reduce early and late treatment side effects in this generally young patient population. In addition, clear guidance is provided on the management of Hodgkin survivors. Other topics addressed include epidemiology, pathogenesis, the role of the microenvironment, initial clinical evaluation, imaging diagnosis, use of staging systems, and prognostic factors. The new edition of Hodgkin Lymphoma: A Comprehensive Overview has been revised and updated by key opinion leaders to reflect recent progress in the field. It will be of great value to hematologists, oncologists, and all others with an interest in Hodgkin lymphoma.

Andreas Engert, MD, is a professor of internal medicine, hematology and oncology. He received his medical degree at the Hannover Medical School and the University of Cologne (Germany). Between 1988 and 1990, he worked at the Imperial Cancer Research Fund and the Royal Free Hospital in London on new immunotherapeutic approaches. Since then, his group focused on developing antibody-based immunotherapy for patients with malignant lymphoma leading to a number of phase I/II clinical trials. He finished his postdoctoral lecture qualification in 1995, was appointed consultant at the University Hospital of Cologne and became head of staff 1996. He was elected editor of the Cochrane Hematological Malignancies Group between 2000 and 2012 and vice director of the Department for Hematology and Oncology since 2000.

After serving as secretary of the German Hodgkin Study Group (GHSG) since 1999, he was elected GHSG chairman in 2007. In May 2012, the University of Belgrade awarded him an honorary doctorate and he became EHA Executive Board member of Directors between 2012 and 2018. He was appointed Editor-in-Chief of HemaSphere, the new EHA journal in 2018. Professor Engert has published more than 400 original papers in journals such as NEJM, Lancet and others (impact factor, 2007-2017: 1928,4 points).

He received a number of awards including the Ludwig-Heilmeyer-Medal, the DGHO Arthur-Pappenheim Prize, the Research Award of the University of Cologne, the award of the German Cancer Society 2011, the Paul-Martini-Prize 2013 and the John Ultmann Lymphoma Award 2017 and others.

Dr. Anas Younes is a member of Memorial Sloan Kettering Cancer Center (MSKCC) Lymphoma Service, and professor of medicine at Weill-Cornell Medical College in New York. He is an international expert in both Hodgkin’s and non-Hodgkin’s lymphoma. Between 2013-2016 he served as chief of the lymphoma service at MSKCC; prior to that he was director of clinical and translational research at the Department of Lymphoma and Myeloma at MD Anderson Cancer Center. During his leadership tenure at MDACC and MSKCC, 10 drugs were approved by the FDA for the treatment of Hodgkin and non-Hodgkin lymphoma. He currently serves as the cancer center’s special advisor to the chief of medicine for research, and holds the Steven Greenberg Chair.

Dr Younes also conducts laboratory-based research aiming at translating the current knowledge into innovative clinical trials to improve the cure rate and survival of patients with Hodgkin and non-Hodgkin lymphoma. He led the trials that resulted in the FDA approval of brentuximab vedotin and nivolumab for the treatment of patients with relapsed Hodgkin lymphoma.

Dr. Younes has published more than 250 papers, and served as the principal investigator of more than 60 clinical trials and has led the National Cancer Institute-funded SPORE (Specialized Programs of Research Excellence). He is also the principal investigator of a SCOR grant supported by the Leukaemia and Lymphoma Society focusing on the development of CAR T cell therapy for lymphoma.

“While I think the book is written for all levels, the group who will glean the most benefit is practitioners who manage Hodgkin lymphoma (e.g., hematology and oncology fellows and attendings). The book does meet the needs of the intended audience and summarizes all clinically relevant studies published to date. … This book is an expertly written comprehensive review of Hodgkin lymphoma.” (Boyu Hu, Doody’s Book Reviews, July 10, 2020)