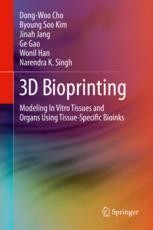 Prof. Dong-Woo Cho received his Ph.D. in Mechanical Engineering from the University of Wisconsin-Madison in 1986. Ever since, he has been a professor in the Department of Mechanical Engineering at the Pohang University of Science and Technology. He is the director of the Center for Rapid Prototyping-based 3D Tissue/Organ Printing. His research interests include 3D microfabrication based on 3D printing technology, and its application to tissue engineering and more generally to bio-related fabrication. He has recently focused his attention on tissue/organ printing technology and development of high-performance bioinks. He serves or has served on the editorial boards of 11 international journals. He has published over 280 academic papers in various international journals in manufacturing and tissue engineering and has contributed chapters to ten books as well as writing a textbook related to tissue engineering and organ printing. He has received many prestigious awards including “the mystery of life” award at The Roman Catholic Archdiocese of Seoul (2018, January) and “the respect life” award from LINA Foundation 50+ awards (2019, April). He was also awarded the Nam-Go chair professorship at POSTECH.
Prof. Jinah Jang received her Ph.D. at the Division of Integrative Biosciences and Biotechnology at POSTECH in 2015, and she worked as postdoctoral fellow in the Department of Mechanical Engineering at POSTECH (2015–2016) and the Institute for Stem Cell and Regenerative Medicine/Department of Pathology and Bioengineering at the University of Washington (2016–2017). She joined POSTECH in the spring of 2017 as an assistant professor in creative IT engineering. Her research focuses on the building the functional human tissues from stem cells via 3D bioprinting technology and printable biomaterials, particularly based on tissue-specific bioinks. Her successful achievements may lead to clinical applications for providing advanced therapeutic methods, understanding disease mechanisms, and engineering micro-tissue models.
Dr. Byoung Soo Kim received his Ph.D. in Mechanical Engineering from POSTECH in 2019. During an MS and PhD integrated program at the Department of Mechanical Engineering in POSTECH under the guidance of Prof. Dong-Woo Cho, his research focused on 3D printing system development, dECM-based bioink formulation, and in vitro tissue biofabrication. He is particularly focused on 3D cell printing of in vitro human skin models. He has suggested a novel platform for matured 3D skin constructs by employing a printable functional transwell system, rather than using commercial transwell inserts. Furthermore, he formulated a porcine-skin-derived tissue-specific bioink and applied it to skin tissue engineering. A vascularized and perfusable human skin equivalent composed of an epidermis, dermis, and hypodermis was 3D cell-printed and matured. Based on his previous achievements, he is now working on in vitro skin disease modeling for better pathophysiological studies.
Dr. Ge Gao received his master’s degree from Huazhong University of Science and Technology (HUST) and his Bachelor’s degree from Harbin Institute of Technology (HIT), majoring in Materials Science. Since 2014, he has been a Ph.D. student at the Department of Mechanical Engineering at POSTECH. His current research focuses on 3D cell-printing of vascular constructs and their applications as in vitro vascular platforms and in vivo blood vessel bypass grafts. In addition, he also developed a vascular-tissue-specific bioink that can facilitate the functionalization of the fabricated vascular equivalents. These achievements might be useful for a wide range of biomedical applications, from modeling blood vessel relevant diseases to building vascularized tissues/organs.
Mr. Wonil Han received his bachelor’s degree in Life Science from Handong Global University in 2015. Since then, he has been a graduate student on an MS and Ph.D. integrated program, at the Department of Integrative Bioscience and Biotechnology at POSTECH under the supervision of Prof. Dong-Woo Cho. His research interests include liver tissue engineering and regenerative medicine via 3D cell printing technology, the regulatory effect of dECM bioinks of normal tissues on the fibrotic disease models, and big data analysis of differential stem cell behaviors in dECM bioinks from different kinds of tissues.
Dr. Narendra K. Singh has completed his Ph.D. in Materials Science from the Indian Institute of Technology-Banaras Hindu University (IIT-BHU), India in 2012 and has subsequently joined as a postdoctoral research fellow in the Department of Polymer Science and Engineering, Sungkyunkwan University, South Korea (2013–2015). He is currently a postdoctoral research fellow under prof. Dong-Woo Cho at the Department of Mechanical Engineering, Pohang University of Science and Technology (POSTECH), South Korea. His research interests include biomaterials, proteomics analysis of dECM bioinks, 3D cell-printing technology, and regenerative medicine. In particular, his current research focuses on the 3D cell-printing of microfluidic kidney-on-a-chip for the development of in vitro disease models and drug toxicology advancement. He has published 12 research articles in internationally reputed peer-reviewed journals and two book chapters. His research work has been selected for the cover page of Nanosci. Nanotechnol. Lett, 1: 52-56 (2009), and his work (J. Mat. Chem. 21:15919-15927 (2011) has been highlighted in Nature India.