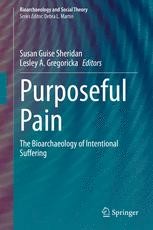 The Bioarchaeology of Intentional Suffering

Pain is an evolutionary and adaptive mechanism to prevent harm to an individual. Beyond this, how it is defined, expressed, and borne is dictated culturally. Thus, the study of pain requires a holistic approach crossing cultures, disciplines, and time. This volume explores how and why pain-inducing behaviors are selected, including their potential to demonstrate individuality, navigate social hierarchies, and express commitment to an ideal. It also explores how power dynamics affect individual choice, at times requiring self-induced suffering.

Taking bioanthropological and bioarchaeological approaches, this volume focuses on those who purposefully seek pain to show that, while often viewed as “exotic,” the pervasiveness of pain-inducing practices is more normative than expected. Theory and practice are employed to re-conceptualize pain as a strategic path towards achieving broader individual and societal goals. Past and present motivations for self-inflicted pain, its socio-political repercussions, and the physical manifestations of repetitive or long-term pain inducing behaviors are examined. Chapters span geographic and temporal boundaries and a wide variety of activities to illustrate how purposeful pain is used by individuals for personal expression and manipulated by political powers to maintain the status quo. This volume reveals how bioarchaeology illuminates paleopathology, how social theory enhances bioarchaeology, and how ethnography benefits from a longer temporal perspective.
Show all
About the authors

Dr. Susan Guise Sheridan is an Associate Professor at the University of Notre Dame. Shereceived her B.A. and M.A.A. from the University of Maryland-College Park, and her Ph.D. from the University of Colorado-Boulder. She has worked extensively in the southern Levant, as well as the American Southwest, and Sudanese Nubia. She coedited a volume on the Hohokam of Pueblo Grande, published on demography and disease in ancient Nubia, and has spent the last 20 years reconstructing aspects of daily life using paleopathology, bone chemistry, and biomechanics for large commingled collections from Jerusalem, Qumran, southern Jordan, and ancient Palestine. She ran a summer National Science Foundation-Research Experiences for Undergraduates (NSF-REU) program in bioarchaeology for 12 years. Sheridan is also the founder and administrator of the very large and active BioAnth News Network on Facebook, Twitter and YouTube.

Dr. Lesley Gregoricka is an Associate Professor of Anthropology in the Department of Sociology, Anthropology, and Social Work at the University of South Alabama. She received her B.A. from the University of Notre Dame and her M.A. and Ph.D. from The Ohio State University. Her research focuses on prehistoric mortuary practices and the biogeochemistry of ancient human skeletal remains to examine changing patterns of mobility and social complexity across Arabia and the Levant. Her publications have appeared in many venues, including the American Journal of Physical Anthropology and the Journal of Archaeological Science, and she recently co-edited a volume entitled Mortuary and Bioarchaeological Perspectives on Bronze Age Arabia with the University Press of Florida. Her work has been funded by the National Science Foundation, the Center for Bioarchaeological Research, and the American Philosophical Society, and the results of her research covered by The New York Times, NPR, National Geographic, and The Atlantic.