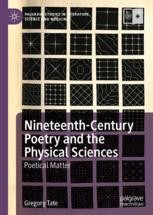 Nineteenth-Century Poetry and the Physical Sciences

Poetical Matter examines the two-way exchange of language and methods between nineteenth-century poetry and the physical sciences. The book argues that poets such as William Wordsworth, Mathilde Blind, and Thomas Hardy identified poetry as an experimental investigation of nature’s materiality. It also explores how science writers such as Humphry Davy, Mary Somerville, and John Tyndall used poetry to formulate their theories, to bestow cultural legitimacy on the emerging disciplines of chemistry and physics, and to communicate technical knowledge to non-specialist audiences. The book’s chapters show how poets and science writers relied on a set of shared terms (“form,” “experiment,” “rhythm,” “sound,” “measure”) and how the meaning of those terms was debated and reimagined in a range of different texts.

“A stimulating analysis of nineteenth-century poetry and physics. In this groundbreaking

study, Tate turns to sound to tease out fascinating continuities across

scientific inquiry and verse. Reflecting that ‘the processes of the universe’ were

themselves ‘rhythmic,’ he shows that a wide range of poets and scientists were

met. ‘The motion of waves,’ Tate demonstrates, was ‘the exemplary form in

the physical sciences.’ Sound waves, light, energy, and poetic meter were each

characterized by a ‘process of undulation,’ that could be understood as both a

physical and a formal property. Drawing on work in new materialism and new

that characterizes the undulatory as (in John Herschel’s words) not ‘things,

“This impressive study consolidates and considerably advances the field of physics

and poetry studies. Moving easily and authoritatively between canonical and scientist

thought and poetic form into telling relation, disclosing how they were understood

variously across the nineteenth century as both comparable and competing

Nineteenth-Century Poetry and the Physical Sciences is both scholarly and accessible,

a fascinating and indispensable contribution to its field.”

—Daniel Brown, Professor of English at the University of Southampton, UK

“Essential reading for Victorianists. Tate’s study of nineteenth-century poetry and

empirical fact and speculative theory rather than their antagonism. The

undulatory rhythms of the universe and of poetry, the language of science and of

Mathilde Blind and Hardy through their explorations of matter and ontological

Gregory Tate is a lecturer in Victorian literature at the University of St Andrews, and the author of The Poet’s Mind: The Psychology of Victorian Poetry 1830-1870 (2012).