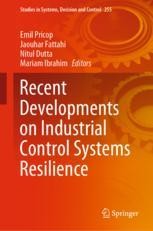 This book provides profound insights into industrial control system resilience, exploring fundamental and advanced topics and including practical examples and scenarios to support the theoretical approaches. It examines issues related to the safe operation of control systems, risk analysis and assessment, use of attack graphs to evaluate the resiliency of control systems, preventive maintenance, and malware detection and analysis. The book also discusses sensor networks and Internet of Things devices. Moreover, it covers timely responses to malicious attacks and hazardous situations, helping readers select the best approaches to handle such unwanted situations. The book is essential reading for engineers, researchers, and specialists addressing security and safety issues related to the implementation of modern industrial control systems. It is also a valuable resource for students interested in this area.

Emil Pricop is currently with the Control Engineering, Computers & Electronics Department of the Petroleum-Gas University of Ploiesti, Romania. He holds the position of Senior Lecturer since 2018, and he is teaching computer networking, software engineering, and human–computer interaction courses. He received his Ph.D. in Systems Engineering from Petroleum-Gas University of Ploiesti by defending in May 2017 the thesis “Research regarding the security of control systems”. His research interest is cybersecurity, focusing especially on industrial control systems security. Dr. Emil Pricop is the co-editor of the book Recent Advances in Systems Safety & Security (Springer, 2016) and the author or co-author of 2 national (Romanian) patents, 5 book chapters published in books edited by Springer, and over 30 papers in journals or international conferences. Dr. Pricop is the initiator and chairman of International Workshop on Systems Safety and Security – IWSSS.

Jaouhar Fattahi is currently with Defence Research and Development Canada (DRDC) at Valcartier Research Centre as a defence scientist. He is also an adjunct professor with Laval University, Quebec City, Canada. He received his Ph.D. on the security of cryptographic protocols from Laval University in October 2015. He did his postdoctoral internship in the Canadian Armed Forces Research Centre in the field of cybersecurity. He is a computer engineer since 1995 as well. Dr. Jaouhar Fattahi is the author of the theory of witness functions for verifying security inside cryptographic protocols. He now specializes in reverse engineering and machine and deep learning applied on security and cybersecurity. He is an IEEE member.

Nitul Dutta is a professor in the Computer Engineering Department, Faculty of Engineering (FoE), Marwadi University, Rajkot, Gujarat, since 2014. He has a total experience of 20 years. He received B.E. degree in Computer Science and Engineering from Jorhat Engineering College, Assam (1995), and M.Tech. degree in Information Technology from Tezpur University, Assam (2002). He completed Ph.D. (Engineering) degree in the field of Mobile IPv6 at Jadavpur University (2013) and published 15 Journal and 30 conference papers. He has completed two AICTE-sponsored research projects of worth Rs. 25 lakhs (approximately) (Rs. twenty-five lakhs only). His current research interests are wireless communication, mobility management in IPv6-based network, cognitive radio networks, and cybersecurity.

Mariam Ibrahim received her bachelor’s degree in Electrical and Computer Engineering from the Hashemite University, Jordan, in 2008; M.S. in Mechatronics Engineering from Al Balqa Applied University, Jordan, in 2011; and the Ph.D. in Electrical Engineering from Iowa State University, USA, in 2016. She was a lab supervisor with EE Department at the Hashemite University (2008–2011). She joined the German Jordanian University (2011) as an RA, where she got a scholarship to pursue her Ph.D. studies; she is currently an assistant professor at GJU. Her research interests include discrete event systems, stochastic systems, power systems, communication networks, healthcare systems, together with their control and resiliency analysis, and system model-based verification\attack graph generation using AADL. She is a member of Iowa Section IEEE Control Systems Society Technical Chapter. She serves as a scientific reviewer in the International Scientific Committee of the International Workshop on Systems Safety and Security – IWSSS since 2017, Journal of IET Cyber-Physical Systems: Theory & Application, 2018, and IEEE Network Magazine, 2018.
Show all