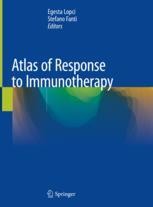 Atlas of Response to Immunotherapy

This atlas is a concise but comprehensive guide to the diverse patterns of response to immunotherapy as observed on Positron Emission Tomography/Computed Tomography (PET/CT) and other conventional imaging modalities, including CT and Magnetic Resonance Imaging (MRI). The purpose for this publication is to fill the gap between the growing clinical relevance and utilization of immunotherapy in medical oncology, mainly based on checkpoint inhibitors, and the need for experienced imagers with reliable tools assessing response to treatment. A series of disease-oriented chapters will present the imaging findings during immunotherapy in the major oncological settings, with helpful comparison of functional (PET/CT) and morphological (CT/MRI) patterns of response in individual cases. To complete the atlas, a dedicated chapter will focus on major pitfalls and immune-related adverse events (irAEs) affecting image interpretation during the course of immunotherapy. The concluding chapter will lastly examine the available data and potential developments of immuno-PET, which is considered as the novel frontier of research in this oncological scenario. The atlas will be of high value for radiologists and nuclear medicine specialists at all levels of experience.

As Nuclear Medicine Consultant, she is directly involved in clinical and research activities with particular interest on molecular imaging applications for nuclear oncology. She is an active member of different organizations and research groups, comprising the AIEOP Hodgkin Lymphoma Interest Group, the EANM Oncology Committee, the EORTC Imaging and Lung Cancer Groups, the UEMS/EBNM CME Accreditation Committee, and is Chair of the EORTC IG Educational Subcommittee. Over the years, she has won several grants and over 10 awards and recognitions for her research activity. She is author of over 103 scientific papers, 4 books and 11 chapters on Nuclear Medicine discipline, and (co)author of more than 165 congress communications for societies such as EANM, SNMMI, AIMN, ESR, ESMO, ESTRO, EANO, RSNA, AUA, CAYAHL, and IMIG.