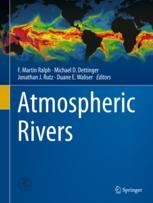 This book is the standard reference based on roughly 20 years of research on atmospheric rivers, emphasizing progress made on key research and applications questions and remaining knowledge gaps. The book presents the history of atmospheric-rivers research, the current state of scientific knowledge, tools, and policy-relevant (science-informed) problems that lend themselves to real-world application of the research—and how the topic fits into larger national and global contexts.

This book is written by a global team of authors who have conducted and published the majority of critical research on atmospheric rivers over the past years. The book is intended to benefit practitioners in the fields of meteorology, hydrology and related disciplines, including students as well as senior researchers.

Dr. F. Martin Ralph is a synoptic and mesoscale research meteorologist focused on understanding the physical processes that create extremes in precipitation ranging from flood to drought, and on advancing associated observations, predictions, climate projections, and decision support tools. A primary topic has been atmospheric rivers and their role in midlatitude precipitation. From 2001-2013 he was Chief of the Water Cycle Branch at NOAA's Earth System Research Laboratory in Colorado where he led the development of the Hydrometeorology Testbed. He also managed NOAA’s Science, Technology and Infusion Program; Chaired NOAA’s US Weather Research Program Executive Committee; and led the creation of NOAA’s Unmanned Aircraft Systems Program. In 2013, he moved to the University Of California San Diego/Scripps Institution Of Oceanography where he is developing the “Center for Western Weather and Water Extremes.”

Dr. Michael Dettinger was until recently a senior research hydrologist for the U.S. Geological Survey, Water Cycle Branch; a research associate of the Climate, Atmospheric Sciences and Physical Oceanography Division at Scripps Institution of Oceanography, La Jolla, California; and a distinguished visiting researcher at the Desert Research Institute and resident scientist at the University of Nevada, Reno. Dr. Dettinger has monitored and researched the hydrology, climates, and water resources of the western United States for over 35 years, focusing on atmospheric rivers and especially their western effects, regional surface water, and groundwater resources, watershed modeling, causes of hydroclimatic variability, and climatic-change influences on western water resources. He has authored over 145 scientific articles in scholarly journals and books, 30 government reports, and another 85 articles in outreach and less formal outlets. Dr. Dettinger’ s scientific publications have been cited more than 22,000 times in the scientific literature, with 51 of the publications cited more than 100 times each. He has degrees from the University of California San Diego, Massachusetts Institute of Technology, and a Ph.D. from the University of California, Los Angeles (atmospheric sciences). Dr. Jonathan (Jon) J. Rutz is a meteorologist for the National Weather Service, located within the Science and Technology Infusion Division at Western Region Headquarters in Salt Lake City, Utah. In this role, he works to enhance the skill and usefulness of forecasts through a combination of research, development, and training. His primary research interests are synoptic meteorology, large-scale water vapor transport, heavy precipitation, and predictability on time scales from days to weeks. He is particularly interested in atmospheric rivers affecting the western United States. Dr. Rutz received a B.S.E. in meteorology from the University of Michigan in 2009, and an M.S. and Ph.D. in atmospheric sciences from the University of Utah in 2011 and 2014, respectively. Dr. Rutz is co-chair of the Atmospheric River Tracking Method Intercomparison Project (ARTMIP) and an organizer of sessions at the American Meteorological Society and American Geophysical Union annual meetings. He also teaches courses on weather forecasting at the University of Utah, and is Research Collaborator at the Center for Western Weather and Water Extremes at University of California, San Diego.Dr. Duane E. Waliser is Chief Scientist of the Earth Science and Technology Directorate at the Jet Propulsion Laboratory (JPL) in Pasadena, California, which formulates, develops, and operates of a wide range of Earth science remote sensing instruments for NASA’s airborne and satellite program. His role in this capacity is to provide science guidance and scrutiny to mission concept, development and implementation across the breadth of JPL’s Earth Science program. His principal research interests lie in climate dynamics and in global modeling and prediction, with emphasis on the Earth’s water and energy cycles. His recent research foci involve utilizing new and emerging satellite data sets to study weather and climate as well as advance our model simulation and forecast capabilities, particularly for long-range weather and short-term climate applications. He received a B.S. in physics and a B.S. in computer science from Oregon State University in 1985, an M.S. in physics from the University of California, San Diego, in 1987, and his Ph.D. in physical oceanography from the Scripps Institution of Oceanography at UC San Diego in 1992. Dr. Waliser is also a Visiting Associate in the Geological and Planetary Sciences Division at Caltech, an Adjunct Professor in the Atmospheric and Oceanic Sciences Department at UCLA, and a Research Associate at the Scripps Institution of Oceanography at UCSD.