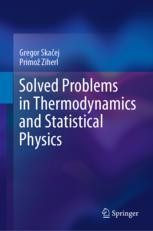 This book contains a modern selection of about 200 solved problems and examples arranged in a didactic way for hands-on experience with course work in a standard advanced undergraduate/first-year graduate class in thermodynamics and statistical physics. The principles of thermodynamics and equilibrium statistical physics are few and simple, but their application often proves more involved than it may seem at first sight. This book is a comprehensive complement to any textbook in the field, emphasizing the analogies between the different systems, and paves the way for an in-depth study of solid state physics, soft matter physics, and field theory.

Primož Ziherl is a professor of physics at the Faculty of Mathematics and Physics, University of Ljubljana, Slovenia, and a scientific councillor at the Department of Theoretical Physics, Jožef Stefan Institute, Slovenia. His expertise covers theoretical soft condensed matter physics, especially structure formation in colloidal suspensions including crystalline and quasicrystalline phases, and theoretical biophysics with a focus on lipid membranes and vesicles as well as on epithelial tissues and early embryonic development.

He teaches a range of courses at the BS and MS level, mostly those for physics students.  With Antonio Šiber, he wrote a textbook on the mechanics of tissues entitled Cellular Patterns (CRC Press, 2017). He served as the training coordinator in Marie-Skłodowska-Curie networks COMPLOIDS and COLLDENSE, co-organizing two summer schools at the International School of Physics "Enrico Fermi" in Varenna, Italy, in 2012 and in 2015 and co-editing the textbook-style proceedings. From 2009 and 2014, he was a member of editorial board of Physical Review E.

In 2008, he was selected an Outstanding Referee of the American Physical Society. In 2009 he received the Golden Plaque award from the University of Ljubljana in recognition of his teaching and research work, and in 2018 he won the national Advisor of the Year award.

Gregor Skačej is assistant professor of physics at the Faculty of Mathematics and Physics, University of Ljubljana, Slovenia.


With Andreja Šarlah, he co-authored a collection of problems in physics for mathematics students (also in Slovenian language).